Ever since cleaning the basement last year, and commandeering a non-used cubby for a bunch of our crap, I have been making a pile for THE DUMP.  I have never been to the dump.  At least not since I was little and went with my Dad.  The dump near us is actually a transfer station/recycling center about 20 minutes north of our house.

As a reminder, here’s a pic of the trash & crap filled cubby I commandeered on the left, and a pic after I cleaned it out and filled it with our cage’s overflow [so much better!]: 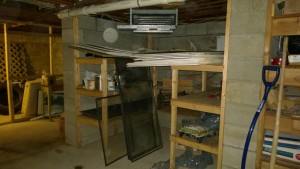 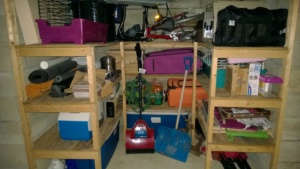 Our cage’s overflow used to be in our cage [naturally], but had to go elsewhere when I converted our cage into my workshop *nods*.

I decided to use a little hallway at the back of our basement [adjacent to our cage] to pile stuff for THE DUMP.  As of last fall, here’s what it looked like [the trash bags eventually got hauled to the curb]: 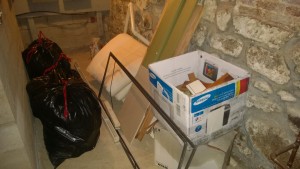 Since then, the pile got bigger, especially after I added numerous boxes of smashed tile and empty mortar & grout containers from when I re-tiled the front hall last September.

Last week I decided that THIS WEEKEND was DUMP weekend.  Yesterday after work I spent about an hour hauling everything up and out to my car.  My poor little Honda was pretty much stuffed to the gills:

The trunk, including a whole bunch of scrap wood which used to be in a big box that wouldn’t fit in my car [grrrr] so it got tossed into the trunk willy-nilly: 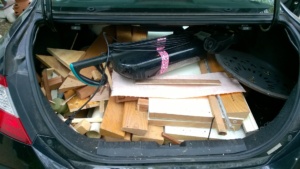 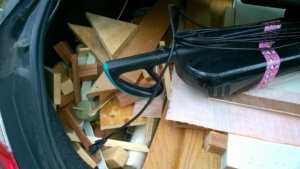 The passenger seat, including a toilet tank and piece of PVC pipe from the cubby I commandeered, and the back seat stuffed with an old mattress cover: 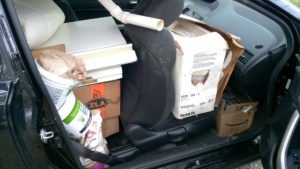 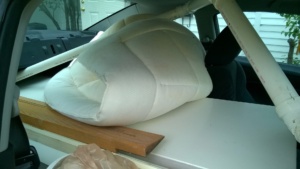 The dump opened at 7:30 this morning, so I left the house at 7.  When I got there at 7:20, they were already open – hooray!  I drove around the complex in literal circles, trying to figure out where to go.  I finally spotted a little stand-alone windowed office with 2 men inside.  I [sort of] parked next to it and a super nice man came out to help me.  I confessed I’d never been there before and needed help.  He was like “no worries!  Before you know it, you’ll be a pro!” and he directed me to do [yet another] U-turn around to the big scale next to his office.  He gave me a thumbs up after he’d weighed my car, but I stared at him dumbly until he came back out.  He [while chuckling] told me to pull ahead and over to the airplane-hanger-looking-thingy half full of trash, and to back my car into a spot.  There were already 5 pickup trucks backed up to the “trash hanger”, unloading their stuff: 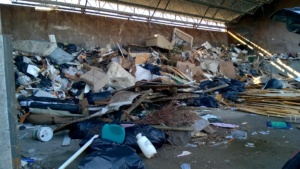 My guess is they [Mello Disposal Corp] go through the stuff constantly and sort it into different recycling categories, as this was the only place I could see with an active trash pile.  There was also a front loader standing by, and when a truck would leave it would roll forward and push the stuff to the back.  It was pretty cool!  It took about 10 minutes to unload everything, and then I drove back towards the scale.  There was a line of pickup trucks coming forward to weigh in, and the scale was one-lane, so once again I was completely confused.  I pulled to the side and after 3 trucks came through the nice man in the office yelled “you have to be pushy – if you wait for them to let you go, you’ll be here all day!”.  It’s completely against my nature, but it’s kind of fun to be pushy sometimes!  So I boldly rolled forward onto the scale, forcing a pickup truck to roll backwards, as I yelled “MY TURN!” [I’m such a dork].  I heard the nice man in the office laugh and yell “there you go!” 🙂 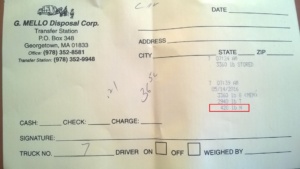 Once I got home I headed back down to the basement and used the shop-vac to give our cage, our common areas, and the [former] dump hallway a good once-over [am I the only weirdo who vacuums their unfinished basement…?]:

Cage [aka my workshop]: 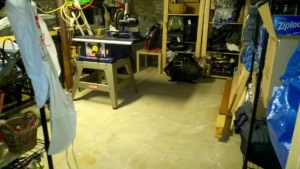 Our common areas and stairs: 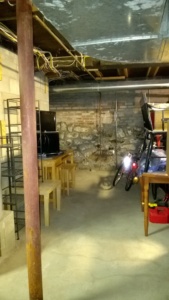 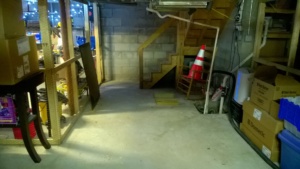 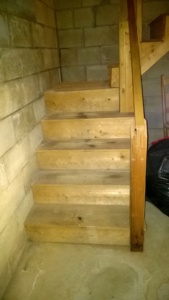 And the hallway formerly full of stuff for THE DUMP: 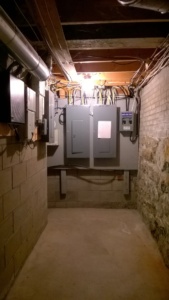 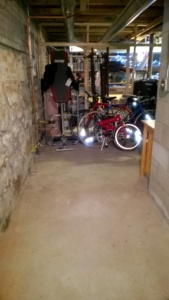 I love when things are CLEAN!

Thank you to hubby’s boss Jon for suggesting Mello Disposal Corp, and thank you to the super nice man at Mello for making what could have been an awful experience an awesome one.