Last weekend I put 2 coats of white paint on the cupboard.  It’s the same paint used on all the trim in the condo.  I have no idea what brand or color it is – I found it in the basement when I moved in and the label was completely covered in paint.  I found lots of unlabeled paint cans in the basement when I moved in, which are now properly labeled and organized *nods*.  The trim paint is a nice linen-white color with a pretty sheen to it: 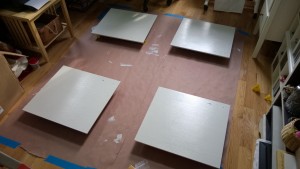 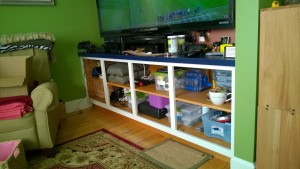 I’m on vacation this week [well, yesterday through the weekend].  Yesterday morning I popped out of bed at 6am, took a 3 mile walk [it’s so blastedly hot out I have to walk at either 6am or 8pm], and decided it was time to put the doors back on the cupboard.  Each one was labeled with tape so I knew the order to put them back: 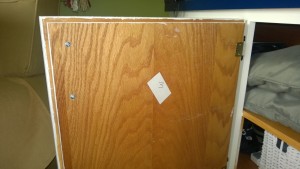 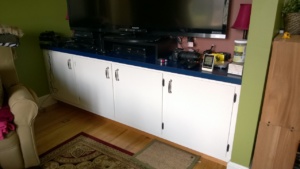 I like the contrast between the white doors and the metallic hardware: 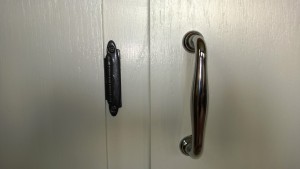 I DON’T LIKE the contrast between the white doors and the dark blue laminate top!  The white makes it look even uglier than the wood did: 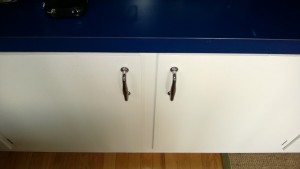 When I had the doors off I tried to see if there were screws holding the top on, but all I saw was glue.  Lots and lots of glue.  Gah!  I pondered giving it a few good whacks from underneath with my hammer.  In my head:  the glue shatters, the laminate top pops off, and life is good.  In probable reality:  the glue stays put, the top holds fast, and the newly painted cabinets shatter into a million shards of splintered plywood.  So I didn’t give it any whacks. Instead, my current plan is to go to the hardware store today, buy a sheet of fancy plywood, and have them cut it down to size [I SUCK at cutting straight lines, so may as well let them do it].  Then I’ll stain it, lay it on top of the ugly laminate, and screw an apron piece to the front.  Problem [hopefully!] solved.

Once the doors were on, I asked Jim what he thought.  He paused and said “it’s very white”.  That’s kind of my opinion too… When you step back and take in the view of the whole room it really does scream “I’m white!!!” but I think after a few days we’ll get used to it.  I definitely like it better than the “before” picture on the right: 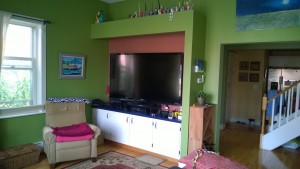 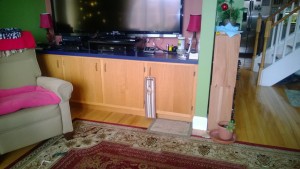 I really think a stained wood top will add the right amount of balance between the white cabinets and the black TV.  If not, I’m considering stenciling a design on each door, similar to what Kammy from Kammy’s Korner did with her white cabinet: 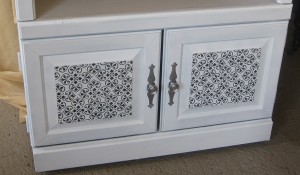 On a side note, as I took the last “after” photo of the white cabinets, a large, black, cat-fur hairball rolled down the reclining chair from the top to the seat.  I was like, OK, time to vacuum.  Then it zoomed sideways around to the back of the recliner.  Yah.  It wasn’t a hairball.  I’m still having heart palpitations knowing a spider of that caliber is lurking very close to where I hang out half the day.  Last night when I was brushing my teeth I noticed Darwin was sprawled on the bedroom floor, lazily [and quite happily] watching something near the top of the door frame between the bedroom and bathroom.  As I moved in for a closer look… yeah,  it was another giant spider.  I slowly backed away while calling hubby in an increasingly hysterical voice.  He captured it in my bug catcher [which I’ve had since I was 8!] and put it outside for me.  Which means the one in the living room is a twin.  GREAT.  How many MORE of them are in the house???  *deep breaths*…