I’ve been writing this post for 2+ weeks now.  I edit some old content, add some new content, then lose my oomph and give up.  Two weeks ago I was sick for a week.  Stomach cramps, sore throat, headache, zero energy.  Thankfully I’m all better now, asides from a low-grade headache which comes and goes.  Then hubby, who was already battling bronchitis, caught my stomach bug, but much worse!  Last Thursday I came home from work and found him curled up in a sweaty, clammy ball on the living room floor with really bad tummy cramps.  So it was off to the ER!  Thankfully everything checked out OK, and he was sent home with anti-nausea medication and stern instructions to drink lots of fluids and eat a bland diet.  He’s lost 7 pounds in as many days, which he can’t afford to lose – he’s one of those tall, skinny, athletic types with long, skinny bird legs.  Grumbles about short legs & Botticelli-esque genetics.

Thankfully he, too, is starting to feel better.  I’ve been slowly nursing him back to health with lots of crackers, soup, water, Gatorade & love [and, much to his annoyance, lots of “Drink!  You have to stay hydrated!  Drink water!  Drink Gatorade!  Quit your bitchin’ and drink SOMETHING!” and “I don’t care if you’re nauseous, you have to eat!  I’ll bring you a puke bucket, I’ll go to the store and get you whatever you want, just EAT!”  Heh… I’m a noodge.  But he tends to go on shut-down when he’s sick and not eat, drink, or sleep enough, so it’s not like I have a choice 🙂

We’ve both been sleeping a lot the past 2 weeks [think bedtime before 8pm].  Which doesn’t leave much time for anything beyond the essentials of life [eat, sleep, work].  No time for blogging or DIY.  I did manage to haul my sick self to the Benjamin Moore store 2 weekends ago [3 minute walk] to buy some paint.  I bought a gallon of Night Flower for the laundry room [satin finish, Aura base] & a gallon of Calypso Orange [high gloss finish, generic base, lightened by 10%] for the kitchen cupboard interiors: 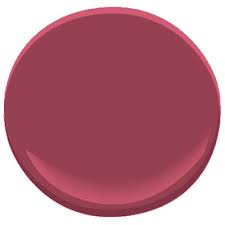 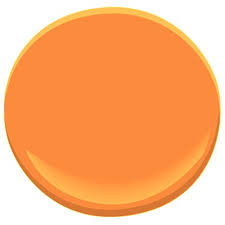 Which I think really complement the amazing wall colors Jim’s awesome friend Torrey picked out for the condo when he first moved in.

I only wanted a quart of orange, but the guy talked me into 2 quarts.  And then said it would be cheaper to buy a gallon of the generic high gloss base than 2 quarts of Benjamin Moore base converted to high gloss.  GAH!  So I ended up with a gallon… meh…  maybe I’ll use the leftover paint to create a shockingly orange workspace in the basement – HA!  Kidding… apparently you should never paint shop when you’re sick or you’ll come home with 4x the paint… face palm

I also picked up a quart of Stix Primer, which the guy said is better than BIN for priming melamine cupboards, and also has little to no odor [whereas BIN smells BAD!].  Our kitchen has no windows, so I went with Stix even though I’ve never heard of it.  Apparently it’s called Stix “because it sticks to anything!”  I hope so…

After stumbling home from the paint store carrying 2 gallons of paint and a quart of primer I gave myself the rest of the day off.  I could have called hubby to come get me with the car, but I was too stubborn, and he wasn’t feeling great either.  Plus, it was 50+ degrees out!  After the brutally cold winter we’ve had, I wanted to enjoy it, even if I wasn’t feeling well.  Although in hindsight I would have taken my car over, b/c that was a LOT of paint to lug home…

The next morning [two Sundays ago at this point!] I managed to work up enough oomph to paint half the laundry room with three coats of Night Flower.  I took frequent breaks to lay on the couch, under my puff, watching Property Brothers reruns.  After I finished with the 3rd coat, I called hubby to come take a look and his first reaction was “Wow, it really looks FABULOUS!” which made me do a happy dance [up until then, he’d been understandably skeptical].  I think it’s quite gorgeous myself!  Then we both collapsed on the couch for the rest of the day.

Here is the half-painted laundry room, featuring the new bold raspberry color, which I think goes very well with the green hallway color [same color the laundry room used to be]: 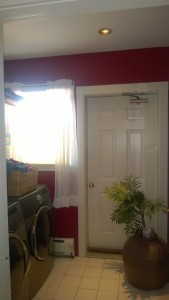 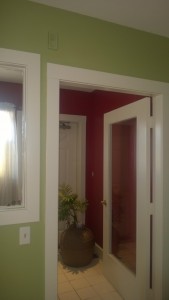 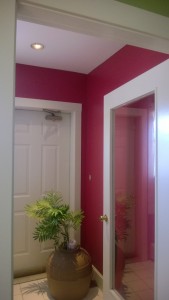 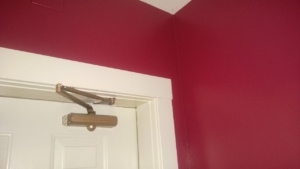 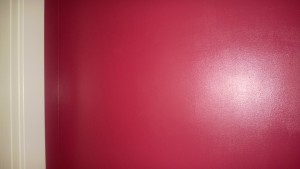 You can see it has a nice sheen to it.  I love how it looks with the white trim.  Good enough to eat.  Hubby is going out of town to help a friend in need this weekend, so I am thinking it will be a DIY-heavy weekend for me.  Finish painting the laundry room… Paint the insides of the kitchen cupboards high-gloss orange… Maybe get the girl cave ceiling lights hung… I have grand plans!