I don’t think I’ve talked about it much, but I’m taking a Basic Home Repair class at the local voc tech High School – it’s part of their evening Adult Ed program.  It’s AWESOME.  The class is 10 weeks long, and is broken out into 3 parts:  basic electrical, basic plumbing, and basic carpentry [30 hours of classes for $180 – cheap!].  Last night was the 3rd class of the semester, and the 2nd one covering basic electrical.  We had to wire an electrical outlet to a switch, and the switch to a light bulb.  I was the first one done with the wiring, and the teacher said I was lightning fast [even though I wasn’t trying to be] and had very neat work – I realize it’s obnoxious to gloat, but I can’t help it 🙂

Here’s a picture I took of my set up after I was done wiring it, and another that my teacher took of me next to my glowing light bulb of success: 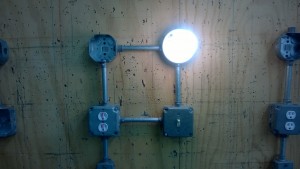 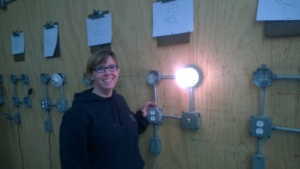 There’s 7 of us in the class, 4 men and 3 women [including my friend Joanne!].  One guy didn’t show up last night, so there were 6 of us.  5 of us successfully wired our bulbs and outlets.  One guy’s outlet made a loud POP! sound when he flipped his switch and his light bulb didn’t go on…  He was displaying about 12 inches of plumber’s crack when he bent over to inspect his wiring, so perhaps he’ll fare better in the plumbing section of class… did I just say that?  Reowrrr!  How catty of me.  I feel bad for him, but dude:  invest in either a belt, or underwear, or both [!] – just sayin’.

When we started, there were 4 empty electrical boxes on the wall [like the empty box in the upper left quadrant of boxes in my first picture].  First we collected everything we’d need from bins around the classroom, including an outlet, an outlet cover, a switch, a switch plate cover, a light socket, wire caps, wire strippers, screws, screwdrivers, and 2 lengths of 14-guage wire.  Then we cut and stripped the ends of the wires and connected the first piece of wire to the outlet [lower left box in the quadrant].  Then snaked that wire through the metal conduit to the right and wired the switch [lower right box in the quadrant].  Then connected the 2nd piece of wire to the switch and snaked it up through the metal conduit to the light bulb socket [upper right box in the quadrant].  After connecting it to the socket, the teacher screwed in the light bulb and connected the live juice.

I wish I had more pictures, but I am too embarrassed to have my phone out, snapping pictures through each class.  Plus it would probably be disruptive.

So, to supplement this nearly picture-less blog post, I will conclude with 2 fairly random pictures.  The first is of a tiny little spider that lives in one of the plants on my desk at work.  Back in the Fall I noticed him starting on his crazy web, which was very small back then, just like him.  We have a fruit fly problem in our office, and most of my plants have a lot of the little f*ckers buzzing around them, so they keep him very well fed and he’s grown about 10 times the size he used to be, even though he’s still really small.  And every week his crazy web gets a little bigger and a little crazier.  Now it’s taking up about half of the pot.  I have a fruit-fly trap in the pot of the plant to the left, which is currently jammed with dead fruit flies.  Yummy.  But there’s obviously enough left over to keep the spider happy.  I am scared of spiders but not when they’re small like this one [I have circled the spider in red because he’s small and hard to see]: 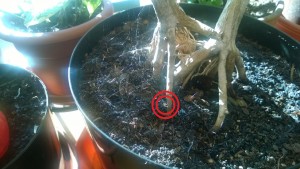 The other pic [okay, I meant to post just one, but it’s turned into 4…] is of a squirrel who spends a lot of time in and around our yard.  She’s beautiful and very smart.  I have named her Princess Peony.  When I hung the bird feeders up on the window outside the first cat platform, I noticed Bonky going nuts one morning – standing on his hind legs and pawing the window while meowing – so I went to investigate and found this: 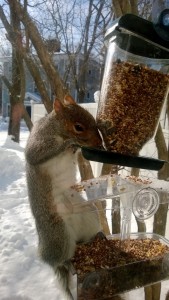 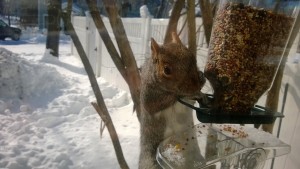 Look at that face!  So to discourage her from feeding out of the bird feeders I rummaged around in my rat food cabinet and grabbed a handful of pellet food and some rat trail mix [it’s for squirrels too – my sharpie says so!]: 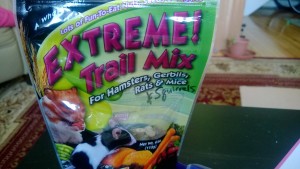 and put it outside in a bowl for her.  After eating for about 2 hours, she disappeared for a few days, probably due to the mild weather we had [?] but this morning she was back!  That made me happy.  I know most people say it’s bad to feed and encourage squirrels, but this one has been around the yard longer than I have, and I love her!  My husband says it’s probably a different squirrel I’m seeing each time, but I know it’s the same one!  I looked it up and wild grey squirrels can live 12-20 years, are solitary animals, and have a distinct territory of a couple hundred feet.  They’ll defend their territory [not violently] against other squirrels and anything else that comes by [including humans] by chittering and waving their tail.  Our yard and surrounding trees are definitely her territory 🙂  I’d rather leave a bowl of food on the ground for her than have her constantly pulling our bird feeders off the window.  And I know I can invest in squirrel proof feeders, but if I’m feeding birds, I’m also going to feed the squirrel!

This morning she was happily eating out of the bowl of rat food [crappy picture because I was super zoomed in from the edge of the driveway]: 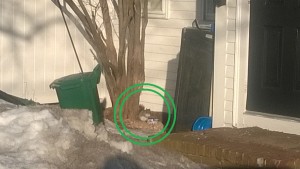