Jim and I spent 10 days on the Big Island of Hawaii at the end of March into April.  This was our 5th trip to Hawaii and our 2nd trip to the Big Island.  It became such a comedy of errors that my coworker Lauri dubbed it the “Brady Bunch Curse” trip!  If you’re not familiar with the Brady Bunch curse, the Brady’s went on a trip to Hawaii and Bobby found a tiki idol in the sand and wore it as a good luck charm but instead it brought bad luck to anyone who wore it.  That was us, for sure.

As a caveat, the worst day in Hawaii is still better than most days anywhere else, so there’s that… 😛  Plus there are spinner dolphins [taken from the lobby of our hotel with my zoom lens]: 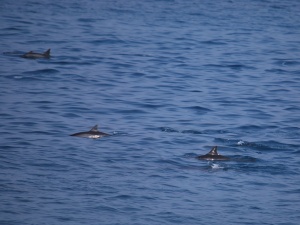 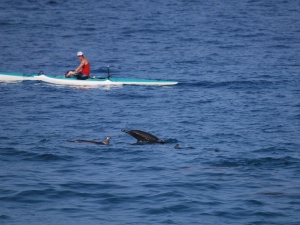 Gold Dust Day Geckos [taken at a cafe in Kona, up the street from our hotel]: 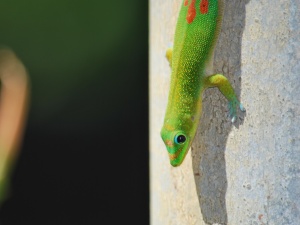 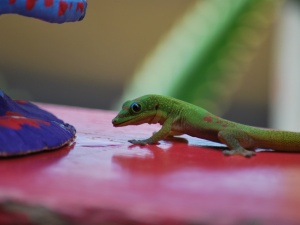 And Java Sparrows that visited our balcony every day: 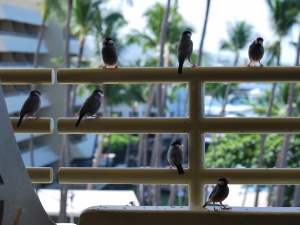 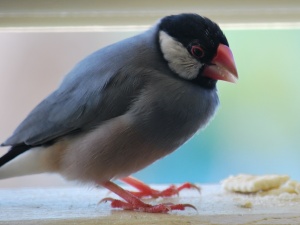 Here’s why our trip felt cursed:

[1].  Hubby arrived in Hawaii with a nasty stomach flu, which meant 2 days in bed and a very bland diet.  Meanwhile I spent $26 on the nastiest take-out pizza ever because I was starving.  I ate one piece and threw the rest out.  And for me to throw out pizza…

[2].  Both my pairs of prescription sunglasses decided to de-screw on the flight over, resulting in a pile of metal rubble & lenses in my purse.  WTF?  What are the odds???  Thankfully Hawaii Costco was able to replace one set of lenses into a new frame for me.

[3].  I left my credit card at a restaurant and didn’t realize until about an hour later when I went to pay for snacks and drinks at the local ABC convenience store.  I had to use my debit card [and try to remember the PIN].  Then trek the 1/2 mile back to the restaurant, in a panic, in the dark, where they spent 20 minutes looking for it.  OMG!  I finally got it back [PHEW] and it wasn’t compromised [double PHEW].

[4].  We paid $250 to go on a night dive with Manta Rays and saw… plankton.  Lots and lots of plankton.  No Manta Rays.  Awesome.  An hour in the water freezing our butts off and no Mantas.  We got a voucher to come back for free anytime within the next year, which is great, but only helps if we go back to the Big Island next year!  We did see a very nice sunset: 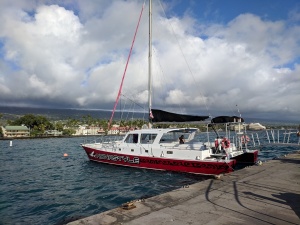 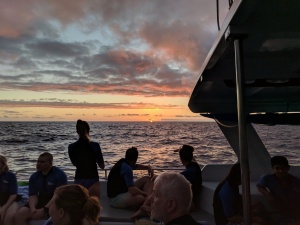 [5].  We were both looking forward all year to seeing LIVE LAVA.  Lava starting pouring into the ocean in July 2016, which doesn’t happen often.  I would have killed to see the “lava fire hose” [photo credit John Tarson]: 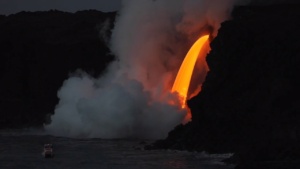 How cool is that???  We spent months researching companies offering boat tours to see the flow day or night [you can see a boat in the left foreground of that pic, which gives you a sense of scale!].  We were planning to do at LEAST 2 boat tours.  One during the day and one at night.  But the flow abruptly stopped January 9, 2018.  D’OH!!!  I was disappointed, but was still looking forward to seeing the active lava creeping across the coastal plain.  You could get REALLY close since it was slower than molasses [photo credits USGS]: 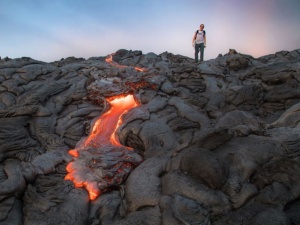 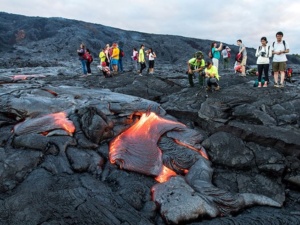 We were planning to bicycle the 8 miles round trip to go see it.  I was so excited!!!  It’s been flowing for YEARS.  Every day.  EVERY. DAY.  The day we arrived, March 28th, it stopped.  I kid you not.  THE. DAY. WE. ARRIVED.  OMFG!!!  The only way we could have seen any active lava flowing would have been to hike a very treacherous 12 mile trail to the Puʻu ʻŌʻō crater, miles above the coastal plain.  NOT!  Even a 4 mile hike makes me cranky and in need of multiple cocktails.  Speaking of cocktails… Here’s a MaiTai & a Hawaiian Dream I very much enjoyed: 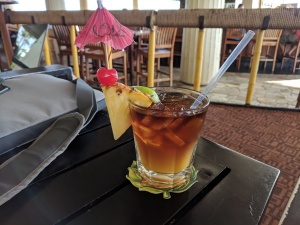 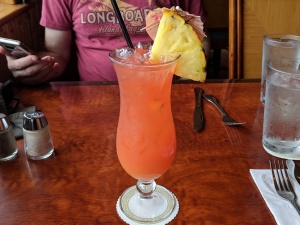 [6].  We went to see live lava at Kīlauea volcano and actually did see lava!!!  We were one of the lucky 5% in that regard.  But the volcano exploded 10 hours later, taking out at least one of the USGS’s solar panels [photo credit USGS]: 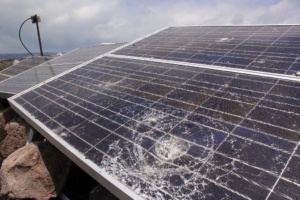 We blame the curse.   More on our trip to the volcano in a later post!

[7].  We jumped off a 40 foot cliff and ended up in the Urgent Care Clinic getting his and hers tetanus shots [more on that in a later post!]: 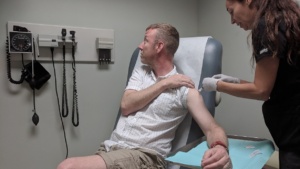 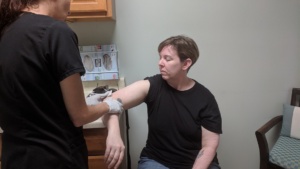 [8].  Our peaceful, relaxing, water-front hotel ended up being a RESORT.  And resorts are not quiet, peaceful, or relaxing!  At least not to us!  We go to bed at 8, even on vacation.  Our room was right above the pool and we had to endure a never ending array of children screaming from early morning until after dark.  We also had to live through 5 incredibly loud luaus [complete with drums, chanting, fire, and hundreds of paying guests all screaming and clapping].  It was cool to watch from the balcony.  ONCE.  After that we bought ear plugs and shut the blackout curtains.  There was also a wedding one night.  That was even worse than the luaus because of the cheesy and way too loud wedding singer who crooned until 10pm.  And the drunk guests in the pool.  Here’s the view from our room where you can see the chairs and tables always set up in preparation for the 4-times-a-week luaus & the 1-3-times-a-week weddings [and the pool]: 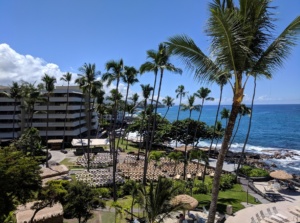 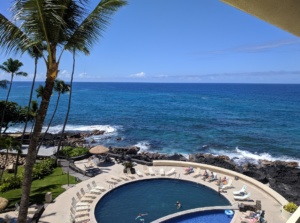 The view from our balcony was beautiful.  It’s just too bad it was so close to the action [the 2nd pic shows a luau in progress]: 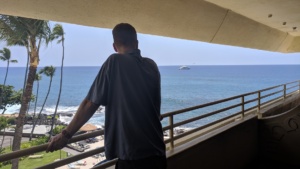 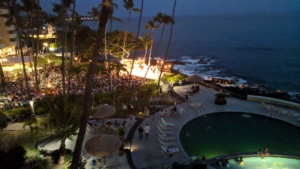 Next time we know to stick with hotels… Much quieter!  Less screaming children!  No luaus.  NODS

The resort wasn’t all bad, it had amazing watermelon infused water in the lobby, a koi pond, wonderful views for teleworking or just hanging out, and a private lagoon with shaded seating: 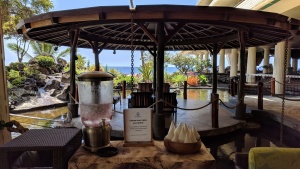 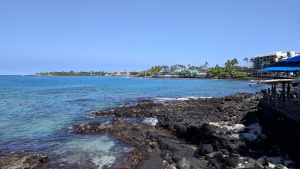 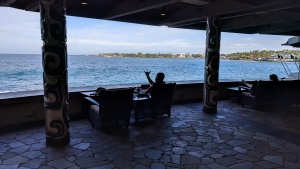 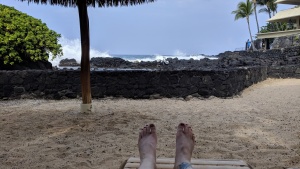 It was wonderful to be back in Kona.  We ♥ Kona!  You can see our monstrosity of a cruise-ship shaped hotel [resort] in the 2nd photo! 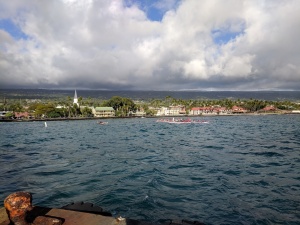 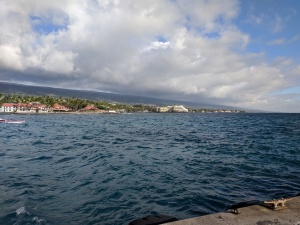 I will post more details about our Hawaii adventures soon!

I did find a little tiki man on our last morning in Hawaii which I bought as a reminder of our Brady Bunch Curse trip: 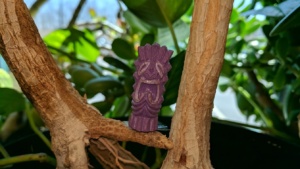 We now realize the Island was about to undergo a major eruption, which started 3 days after we left. We were one of the last people to see Kīlauea crater up close.  It’s now closed indefinitely.