Today was a very bad day.  We woke up to our poor rat Franc’s face swollen to the point of disfigurement: 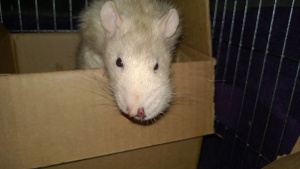 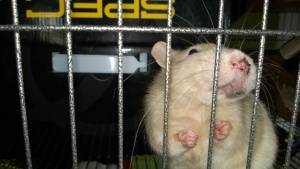 2 days ago it looked like he had some food stuffed in his cheek like a hamster, so we didn’t think anything of it.  Then last night we realized it was something to keep an eye on.  By this morning it had doubled in size which is when I started to freak out.  Thankfully our awesome vet was able to fit him in the morning.  He drained it and said the smell almost keeled him over, so he knew right then it was some kind of bacterial infection.  Franc is now on 2 antibiotics & 1 anti-inflammatory.  Here’s the poor guy a couple hours after we got back home: 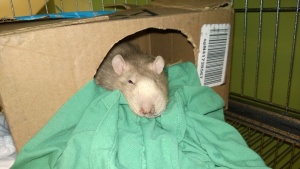 Luckily he LOVES his purple medicine, and gulped it down holding onto the syringe with both hands.  And he took the other 2 like a champ as well.  He’s such a sweet boy.  All the vet techs were gushing over him.

But right after calling the vet & getting his appointment scheduled, I went to check on Nibbler, who’s cage is right next to Franc’s.  She was gone, passed in her sleep 🙁  She’s had some major tumors since last Fall, and it’s a miracle she lasted this long.  For the past week she hasn’t really been able to move much, so twice a day I was carefully moving her over to the kitchen sink and holding her, belly-up in the palm of my hand, under the hot water for a bath – she always bent forwards and licked my hand while I rinsed her lower half under the water – it was the sweetest thing.  I think the hot water felt good on her tumors and bum.  Then I’d place a clean t-shirt in her cage and place her gently on it, give her some whipped cream, and place another t-shirt over her back while she ate.  I’m glad she’s in a better place now, but we’re going to miss her 🙁 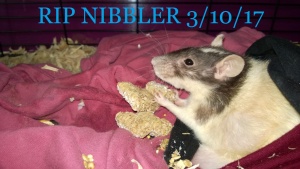 So I needed a project to take my mind off of everything.  I decided that cutting a big hole in a Pottery Barn basket & turning it into a cat bed was just what I needed.  A couple months ago I bought some large, laundry-basket sized Pottery Barn woven baskets.  A darker Havana one & a lighter Savannah one.  I decided the darker one would be perfect for a bedroom cat bed: 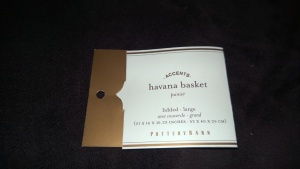 I googled how to cut a hole in a woven basket and found NOTHING.  So I winged it.  I noticed there were metal support bars every few inches, so I planned my cut accordingly.  Here’s all the tools I used: 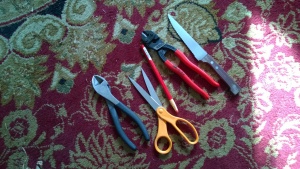 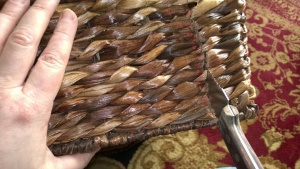 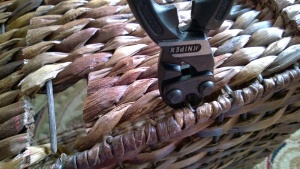 After cutting the hole [which I apparently didn’t take a picture of], I wrapped black ribbon around the top arch to keep everything tight and together.  For this part I dug out the glue gun I bought literally 25 years ago but never used until today: 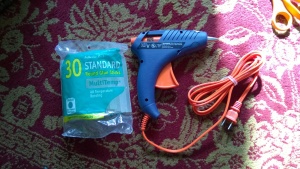 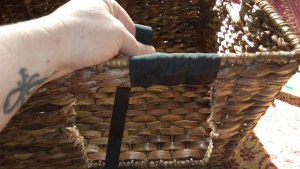 Darwin showed his approval by purring upside down.  After the ribbon was wrapped and glued, the basket was done: 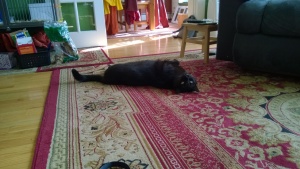 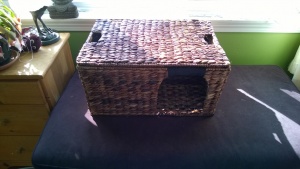 I brought it upstairs and coaxed Bonkers out of what he has been using for a cat bed for the past few months – the BOX the basket came in [cats r funny…]: 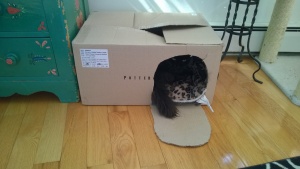 He finally came out and inspected the basket and decided it wasn’t up to par.  But an hour later, he tried it out and he’s been in it ever since: 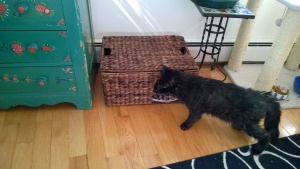 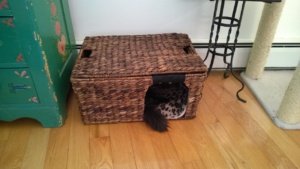 To cap off this awesome day, I dropped the phone I use as my camera and shattered the screen: 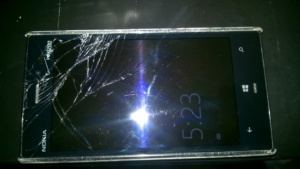 I’m also going to officially say goodbye to Clarabell who died last November.  I was so upset about her passing that I wasn’t able to mention it until now.  Clarabell was a very special rat: