I’ve had a 5-10 gallon fish tank on my kitchen counter for going on 15 years.  I love having one, even though at times the maintenance can be frustrating & challenging.  Over the years I’ve dealt with many issues including mold [from a decoration that had been stored in the basement – I had no idea spores would grow in it and kill all my poor fish!], “ick”, which is a fungal infection and required two bouts of fish anti-biotics, and a fish tank thermometer that went on the fritz and boiled all my poor fish.  Needless to say, there’s been some hard times!  But there’s also been some really good times.  I find fish tanks to be sooooo relaxing to watch.

I always stock my tanks with little fish, like zebra danios, mollys, neon tetras, or [my favorite!] cherry barbs.  I currently have 4 cherry barbs:

They’re about an inch long.  The plants in the tank are all fake.  At times I have had real plants, but they are harder to take care of, and tend to take over: 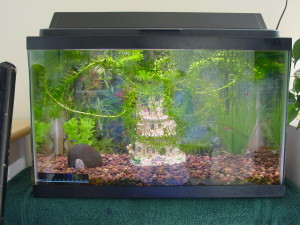 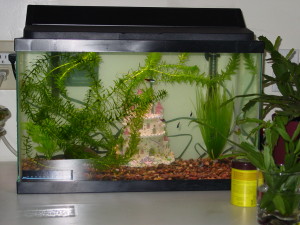 Those are pics from the 10-gallon tank I had in 2004.  Back then I had a mix of cherry barbs and neon tetras.

And I’ve always loved LED decorations!  My favorite was this ornamental castle that lit up each night with twinkling LED lights – unfortunatley they don’t make it anymore: 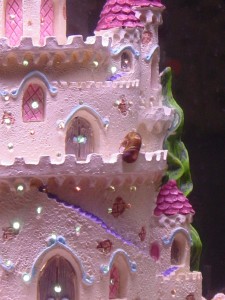 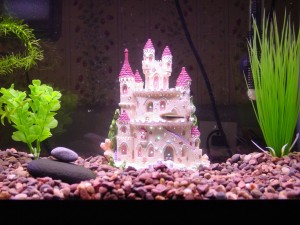 Those are pics from my 10-gallon tank in 2002.  You can see a snail in one pic and a black neon tetra in the other.

Currently I have a Fluval SPEC 5-gallon tank with built in LED lights for nighttime and daytime.  The nighttime lights glow deep blue and are very pretty! 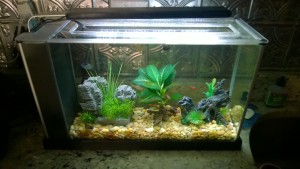 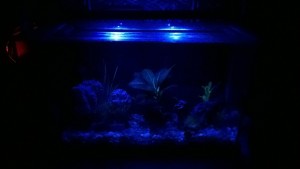 Currently I’ve been battling a nasty case of brown algae which has been slowing taking over the tank.  It’s gross.  I had planned to buy some drops that will kill the algae, but then I remembered that snails LOVE algae and will clean the whole tank!  I’ve had snails in the past, which multiplied into the hundreds [snails are hermaphrodites so instead of mating they lay their own fertilized eggs].  But yesterday, when I went to Petco after work, the girl assured me that these type of snails [zebra nerite snails] need salt water to clone themselves.  They’re so pretty!  They’re yellow and black – one has thin strips and one has fat stripes: 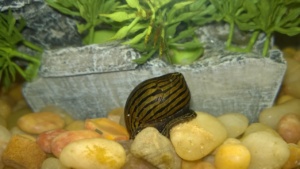 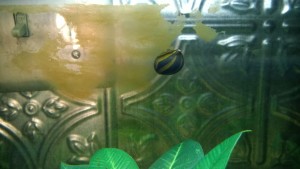 You can see some of the brown algae in those pictures.  The snails have been making quick work of it since yesterday afternoon.  Once they’ve eaten it all, I might have to buy them some algae tabs which will supplement their diet, but won’t cause an algae outbreak in my tank.  Plecostomus will also eat algae, but the ones I’ve had in the past have all died.  So I’m going to stick with snails, which seem much heartier.  Aren’t they pretty?

UPDATE :  Look how much algae the snail has eaten since I posted this blog 2 hours ago! 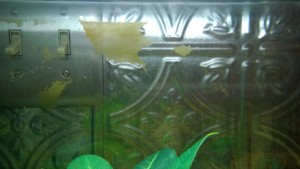 Bizarrely, since writing this post the other day, one of my 4 cherry barb fish has completely disappeared… either my new snails are carnivorous, or it’s just a baffling mystery. When I’ve had snails in the past, they’ve skeletonized a dead fish in a matter of hours, but none of my 4 barbs showed any signs of illness prior to the snails arrival. Maybe they brought in some creepy pet shop disease. Who knows…