We don’t see the Great Blue Heron very often, like hardly ever.  When we do see him, he’s usually flying up river.  But last Friday morning Jim saw him in the river, outside our house, hunting fish.  I was still in bed [it was 5:30am, enough said] so he took a few pictures – this one was my favorite: 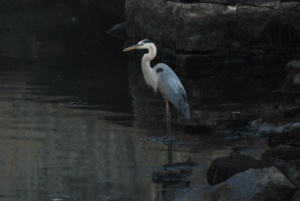 Then on Monday morning we saw the heron again.  I was going in to work late because I had to drop Bonkers off at the vet for blood work at 8:30.  There was no chance of sleeping late [my Furry Snooze Alarm – aka Bonkers – howls and paces until I’m vertical], so I headed downstairs in my pajamas and spotted the heron really close to the house.  I grabbed my new zoom lens and sat in living room window and watched him for about an hour.  He spent a good 20 minutes standing perfectly still, then suddenly stabbed at and caught a fish: 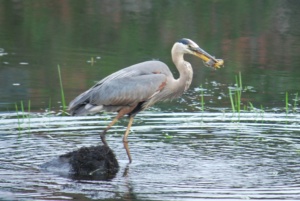 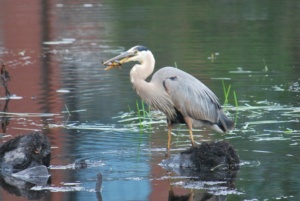 I was so surprised a few seconds later when he shook himself off like a dog!  He’s still kind of “poofed up” from the shake in the 2nd picture: 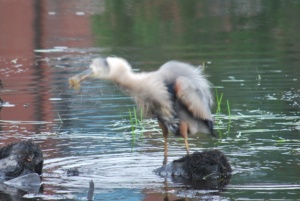 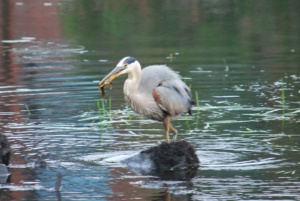 I had no idea birds did that!  Then he flew across the river to the grass and weeds: 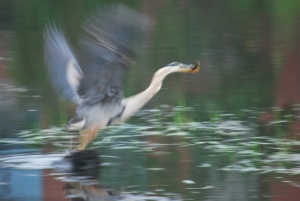 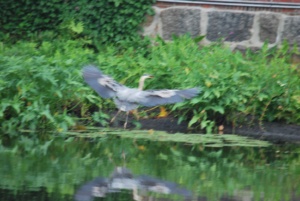 And did another strange thing.  He was standing on the edge of the river, in the mud, with the fish in his mouth.  He carefully dropped it on the mud, then struck at it super fast like he was catching it again.  Then, while holding it in his mouth, he gently dipped it in the River.  He continued that pattern 3 more times before finally eating it!  I’m guessing he was trying to make sure it was REALLY dead?  And clean?  I really have no idea! 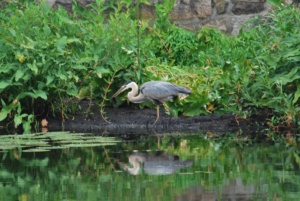 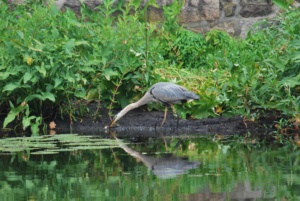 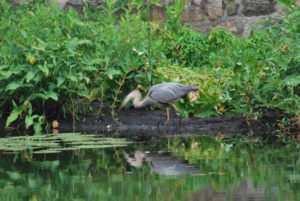 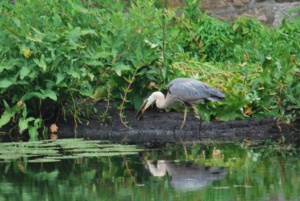 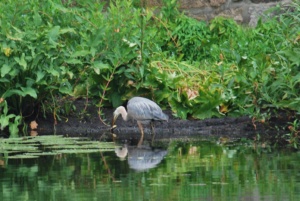 Then he flew back to our side of the river and commenced his fishing activity: 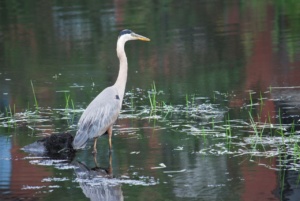 Meanwhile, there were 2 otters fishing nearby: 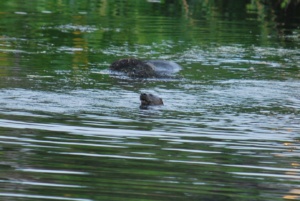 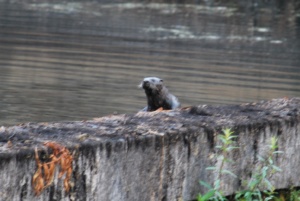 A few times they crawled up on top of the dam [the water level is so low there’s no waterfall currently – MEH!] and then immediately jumped back into the water with a bark.  It was hard to get any photos of them because they were moving and diving so fast!  They got pretty close to the heron at one point and he looked completely appalled and slowly backed away until they moved on.

Last Sunday we had a very bright yellow visitor in the river bed, which I now know is a goldfinch: 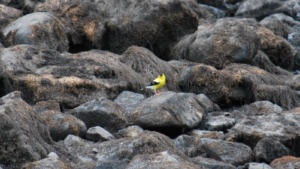 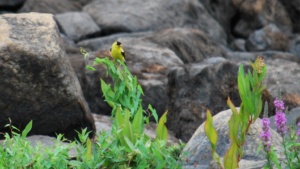 Yesterday after work he even landed on our bird feeder!  I didn’t get a picture, but hubby and I were both like “OMGLOOK!!!”  Our bird feeder used to be up high in our living room window, but the squirrel kept climbing the screen to get up to it [here’s a reminder]: 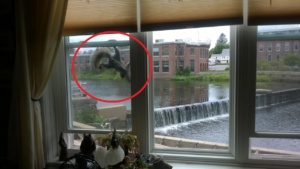 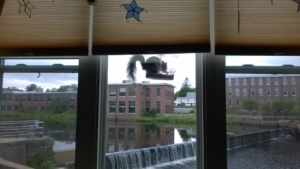 Hubby was worried [rightfully so] that the squirrel would tear the screen and the kitties would happily slip outside.  So I moved the feeder down to the bottom of the window.  Surprisingly the squirrel seems to be leaving it alone [no longer challenging?], and the birds seem to love it just as much.  The chippie loves it more because more seeds land on the cement shelf below our window.  And the cats love it WAY MORE because now it’s at eye level when they’re on the ottoman or windowsill: 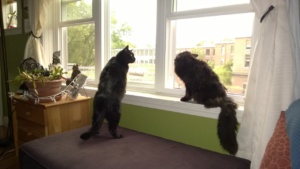 You can kind of see the bird feeder below Darwin’s chin in that photo, which I took this morning.  It was cute to see Darwin & Bonkers bird hunting together.  Bonkers kept trying to push the screen open like he pushes his catio cat door open, but [obviously] that didn’t work.

Meanwhile, miss Birdie has been doing awesome, although she’s currently on a diet because she’s fat.  Darwin is too.  The vet scared me straight last week about the risks of diabetes and other health issues with overweight animals.  Birdie’s also been spending more and more time on the floor lately, which is wonderful: 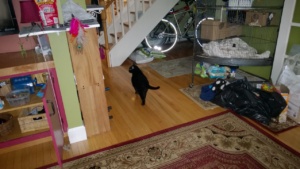 In fact, last week she was rolling around on her “plastic bag nest” on her living room platform [at the top of the above picture, behind the pink feather toy] and she rolled right off onto the floor with a thud.  Darwin, Bonkers and I all looked at her with surprise.  Instead of panicking and racing upstairs or jumping back up, she ran down the hall to the front door and started attacking the carpet like it was the carpet’s fault she fell down – LOL!!!  The boys were so surprised they didn’t even move.  Then after getting her aggravation out, she sauntered back up the hall like she owned the place, and jumped up onto her platform again.  Yay Birdie!

Here’s a couple of random pics to end this post with.  Last Thursday after work I met my friend Christyne in Essex at the end of Island Road to go swimming – it was so beautiful and peaceful: 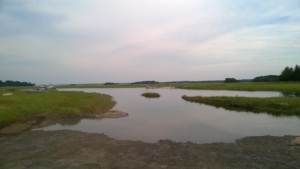 That marsh channel is WAY deeper than it looks, though!  Once you get out beyond that tuft of grass it drops to about 8 feet.  I’m guessing because boats use the channel to access the ocean.  So creepy!!!  Once I realized that, I stayed on the shallow side of the grass tuft nods.

And here’s a shot I took Sunday of the back of our house from the Ipswich Riverwalk Bridge – you can see Bonkers in the catio: 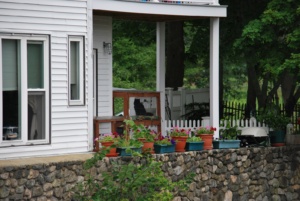 I like how green everything looks, despite our current drought.  I hope it rains a lot soon!

Stay tuned for a duck and turtle story!