This post contains subject matter that may be disturbing to some viewers.  Viewer discretion is advised.

In July 2010, I was attacked by a dog [half Chow-Chow/half Golden Retriever] that I’d taken care of for 9 years.  Something in his brain snapped while we were in his basement.  He spread his front feet, lowered his head, looked at me with his muzzle pulled back and I knew he was going to attack.  I threw my arms up as he knocked me back onto a couch.  He bit me twice, puncturing through the muscles in my upper right arm, and through an artery in my lower left arm.  He knocked me backwards so hard I had a paw-shaped bruise on my upper thigh for 6 weeks.

It all happened so fast I just remember sitting on the couch with our faces a few inches apart yelling ‘BAD DOG!  GO LAY DOWN!” over and over.  Apparently he listened, and bolted upstairs.  The owners told me later they couldn’t find him for 2 days until they realized he was hiding in the far back of the master closet, covered in my blood.  I could say some choice words about them, but I won’t.  I don’t blame the dog [Bear], I blame the owners.  Both their dogs showed signs of abuse, but I could never prove it.  Bear was usually the sweetest boy and would sit right next to me in the yard, laying his head on my shoulder as I scratched his chin.  A few days after the attack the owner said “well, coulda been worse, right?  His sister could have joined in the attack, too!”  Um, yeah, thanks for that awesome visual, asshole…

Bleeding like a water faucet from my left arm, I drove myself to the ER a few miles away.  Not my brightest move, but in my panic I couldn’t remember the address of the house I was at [after 9 years!], and it seemed easier to drive myself.  Which was stupid because halfway there my arm muscles decided to stop cooperating.  After getting patched up at the ER, and having x-rays taken to make sure no teeth were embedded [another awesome visual], I was released to my house [the dog’s owners met me at the ER and drove me home].  Once home, I promptly threw up all over the floor.  Then spent 2 weeks in bed [I ended up getting a staph infection in my right arm, from wrist to shoulder, which required some heavy antibiotics].  While recuperating I watched a LOT of Disney movies, and also happened upon a karate documentary.  It reminded me that I’d always wanted to learn martial arts.  The dog attack was the catalyst that finally got me to sign up.

For the next 3 years [from August 2010 through June 2013] I trained at Mahaney’s Uechi-Ryu Karate Academy in Gloucester, a few miles from my house.  I looked forward to going to the evening classes, and always came home high on adrenaline.  I learned so much and gained some life long friends.  In 2012, I moved in with hubby, in Ipswich.  I found it increasingly harder to drive the 50-minute round trip to attend the evening karate classes in Gloucester, especially in the winter.  I ended up withdrawing from the Gloucester Karate Academy a few months before my 3-year mark, and about a year before I could have attained black belt.

About a year later, in September 2014, I decided I really missed the martial arts, and joined the local Kung-Fu academy in Ipswich.  It’s a 5 minute walk from my house, which made it SO much easier to attend evening classes.  Of course, being a different style of martial arts, I had to trade in my advanced brown belt for a beginner white belt.  Instead of taking their Kung-Fu style karate classes I opted to try their Thai kick-boxing classes.  I loved it!  It was a great way to work out my aggression and frustrations, and have fun doing it.  I loved the classes, but it was a very hard time in my life in terms of mental health.  In addition to dealing with some MAJOR life changes [moving to a new town, getting married!], I was also dealing with an eating disorder that was slowly taking over my life.  The life changes of 2012 were all really good changes, but mentally I was very overwhelmed.  The eating disorder provided a way to relieve my increasing levels of stress and anxiety, as awful as that sounds.

My mental health decline culminated in the shaving of my head in November 2014, a-la Britney Spears.  I stopped going to kick-boxing classes towards the end of December, and let the owners know I needed some time.  They were [and are!] SO nice.  In contrast to my old karate academy – who removed me from their mailing list AND their Facebook page the second I stopped paying, the Ipswich dojo has kept me on their mailing list and has sent words of encouragement, letting me know they’re there for me, and that I’m welcome back any time I’m ready.  I think I’m almost ready.  Instead of Thai kick-boxing, I’m planning to study karate this time.  The Spring sounds like a great time to learn some kick-ass Kung-Fu karate!  Kick-boxing was fun, but I miss the graceful moves and mental discipline of karate.

Hubby has been a great mental boost for me throughout all of this.  He is so loving and supportive, and makes me feel beautiful even though I’ve put on about 40 pounds since [mostly] getting over the eating disorder.   I still have speed bumps here and there… But I’m working with my therapist to completely get away from it.  I suffered from this same eating disorder from 1993-1994, and from 2003-2007.  I’ve kicked it twice, and I know I can do it again!  I was never planning to discuss this on my blog, but Kit, the owner of a fantastic blog I follow, recently came clean about her own battle with an eating disorder, and it gave me encouragement.  Times are changing.  It’s less of a social stigma to share mental health and weight struggles than it used to be.  That gives me strength.  I’ve already discussed my life-long battle with depression, so now I’m coming clean about some more hard truths.

Like I said, hubby has been my strength and my inspiration to get healthy, both mentally and physically.  He goes to the gym, virtually every day, to run on the treadmill for 30 minutes.  I prefer walking outside, but lately it’s just been too cold.   Or I’ve been too lazy.  Or my plantar fasciitus [inflammation of the arch support tendon] has flared up, or a combination of the three.  So in late December I started going to the gym with him.  I ride the recumbent bike for 30 minutes while he runs.  I love it!  I have been riding 5 to 7 miles, 4-5 days a week, for 30 minutes.  Today I rode 7.5 miles in 30 minutes!  A personal best 🙂 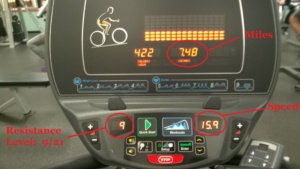 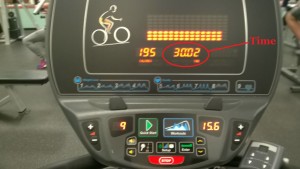 Mental health is a hard thing to deal with.  It’s a daily struggle for millions of people.  All you can do is take advantage of the mental health professionals out there, and do what you need to do to live life the healthiest way that you can.  Never give up.  One foot in front of the other.  If you fall off the wagon, all you can do is get up, dust yourself off, and get back on.  Sometimes that is harder than other times, but with the love and support of an amazing husband, as well as friends and family, I can accomplish whatever I want to.

2½ years later and I’m still struggling with the same battles. Weight, mental health, fitness, sports-related injuries. I never did sign back up for martial arts. But someday I will get my black belt in something. For now I’m just trying to get my head on straight and keep my chin up and try to make healthy choices, and drink less alcohol and eat less sugar/chocolate.

Same struggle, different year.  I have started taking kickboxing classes at the local Y which has been a great way to get back into shape and get stronger.