On Wednesday after work I headed to Home Depot for some tiling supplies [including sealant, thin-set mortar, ¼” spacers, and light grey grout]: 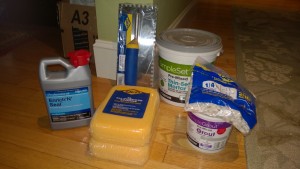 Then I smashed the rest of the first row of tiles out, as well as the row on the opposite side of the room: 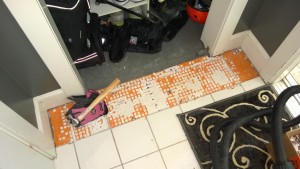 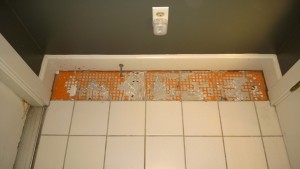 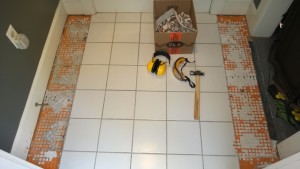 Smashing tiles is a HUGE stress reliever! I thoroughly enjoyed it *nods*.

Yesterday after work I smashed the hell out of the remaining tiles: 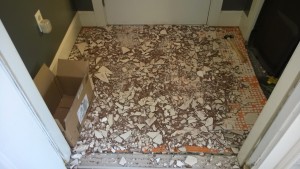 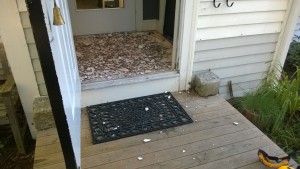 What a mess!!! My safety goggles, construction earmuffs, and dust mask were [literally] lifesavers! There was so much dust from all the smashing it was rolling out the door in big waves. However, when I first started I couldn’t find my work gloves so I used my motorcycle gloves instead. Mistake: 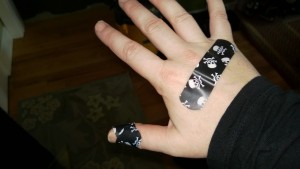 They don’t have padding in the right places to avoid slices from wayward bits of flying tile. I also nicked my legs in a few spots. And without eye protection I could have seriously injured my eyes – shards of ceramic kept nailing me in the face and goggles!

I filled up 2 small boxes with all the chunks and debris I could, then ripped up the orange Schluter Ditra [SD] “uncoupling, waterproofing, and vapor pressure equalization” membrane. I decided to start fresh with a new one, which I picked up today at Home Depot when I got the tiles: 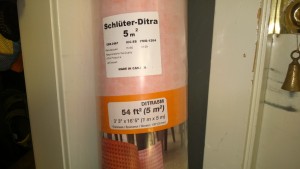 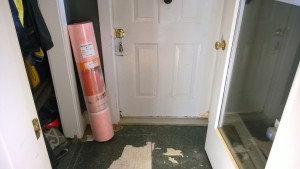 I’ve read a lot about it, it’s pretty impressive stuff! Not only does it keep moisture from getting under the tiles, it also acts as a buffer between pressure from above [like people walking & dropping stuff] and movement from below [like the gradual shifting of the ground/foundation/house]. Apparently our tiles should never crack or shift with an SD membrane under them.

Once that was gone I shop-vac’d the rest of the dust and debris from the front hall. All that’s left is the original blue linoleum with chunks of white fleece backing [from the original SD membrane] stuck to it: 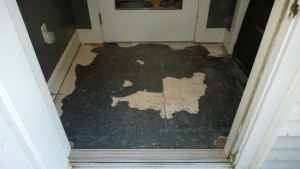 I’ve been working to remove the linoleum fuz from the front hall lines with a putty knife: 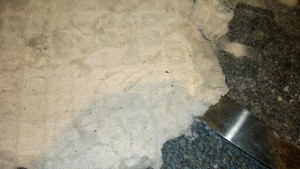 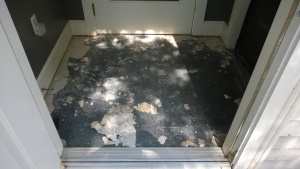 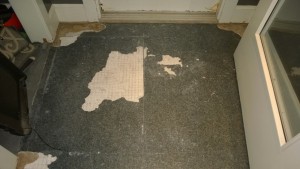 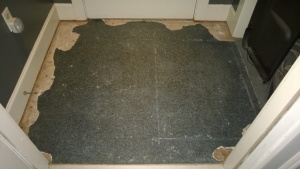 My brother was visiting with his family so I was a bit delayed in starting, but for a very good reason 🙂  I also got some beautiful flowers from hubby: 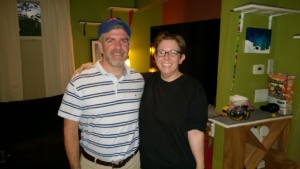 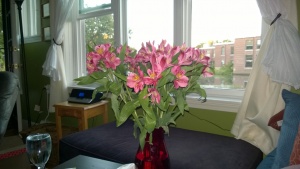 Join 21 other subscribers
← Happy 2nd Blogiversary to Me!!! ← Replacing A Cracked Ceramic Tile