So last week I installed the roof on the cat enclosure.  I also began the task of stapling chicken wire to the outside of the enclosure.  It was very labor intensive and the hours of stapling aggravated my carpal tunnels [thankfully I have wrist braces to wear at night, which have helped a ton].  All told, it took 90 square feet of chicken wire and 1,400* staples to get the majority of the enclosure chicken’d.  I still need to chicken the door, but that requires I actually build the door first, which is next on the list.

* Hubby wanted to know how I knew I’d used 1,400 staples – I am a bit OCD and tend to count things like steps I’m walking, stairs I’m climbing, seconds passing between events, etc.  However, I did not count every staple.  I only know I used 1,400 because each box had 1,000 staples, and I used just under 1½ boxes 🙂

It’s a bit hard to manhandle a roll of chicken wire yourself, while simultaneously trying to staple it, but I got the hang of it pretty fast.  I used the ladder to hold up the wire on the first segment, but after that I was a one-woman machine! 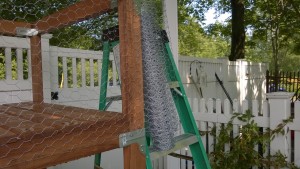 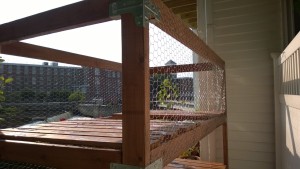 Bonkers checked out my work and decided that chicken wire is an AWESOME thing to rub your face on.  He likes to rub his face on everything, leaving a smear of [what our vet calls] “cat grease” behind.  It’s fairly disgusting, and we have to constantly wipe it off wall corners, windowsills, staircase spindles, etc.  Gross.  But that’s Bonkers.   He can rub as much grease as he wants in the enclosure – maybe we’ll get lucky and it will double as a natural bug repellent: 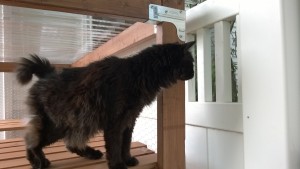 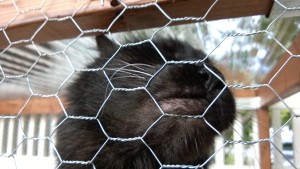 Here’s the enclosure, totally chicken’d [back side, back end, front side]: 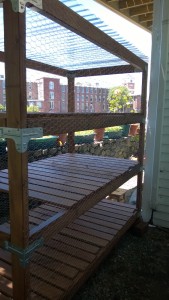 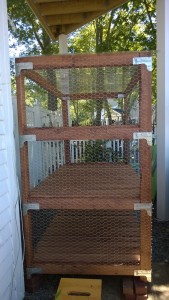 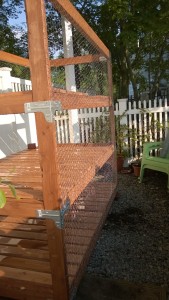 Here’s a closeup of the staples, although I took that pic before I went nuts and added double as many: 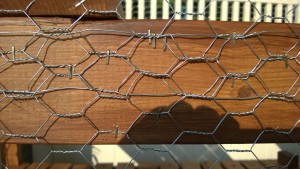 Once I stood back and looked at the finished product, I decided it needed slats to cover the kajillion staples – both for aesthetic reasons and safety reasons:  cut chicken wire [not to mention wayward staples] is SHARP!

Here’s what I envisioned: 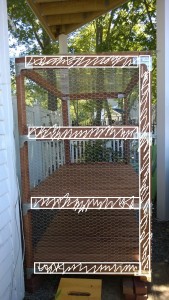 Where the white parts represent stained luan slats.  I didn’t need to worry about the far left side or the back, because those parts will be hidden by the house and fence [I had to pull the enclosure most of the way into the yard to chicken it].

So last Friday [which was a Federal holiday, so no work] I went down to the basement, cut 4 slats of luan, and stained them: 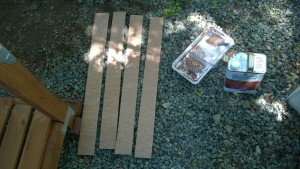 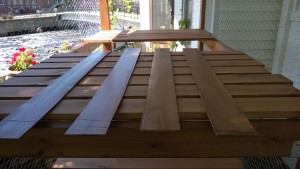 Once they were dry [about 30 minutes] I screwed them to the enclosure, covering the staples and sharp wire edges: 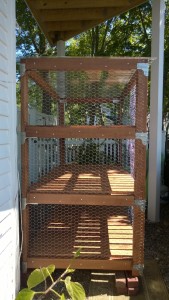 Much better!  On Saturday [btw, hope everyone had a Happy 4th of July!] hubby helped me move the enclosure back to it’s normal position: 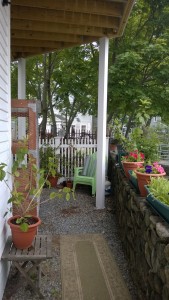 Can you see it over there?  On the left?  Mostly hidden by my hibiscus?  Yes!  The yard is small enough without the enclosure taking up 80% of it – it’s so nice to have the space back: 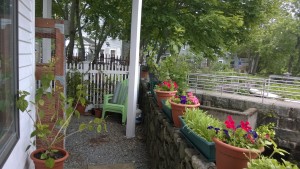 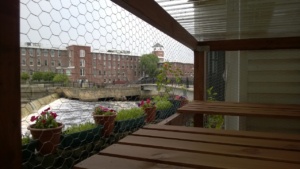 My coral/peach double hibiscus flowered over the weekend, too – it’s always a beauty! 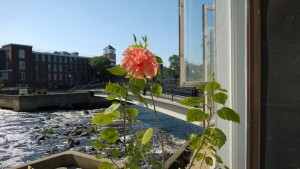 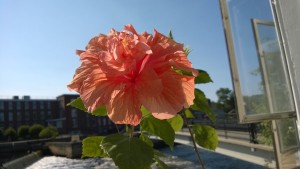 Those ugly crank windows behind the bloom will hopefully be replaced with double-hung sash windows soon!  We’re still keeping our fingers crossed that the town will approve our permit…

Today after work I decided to work further on the slats to cover the staples.  I went down to the basement and cut 4 more pieces of luan – I don’t have 6′ luan, so I cut 2 3′ pieces for each 6′ segment: 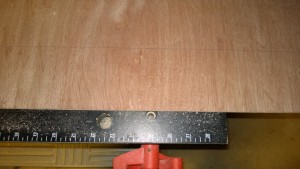 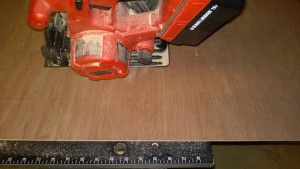 This was around the time I decided I really like Abbie’s Black and Decker Workmate table, and didn’t want to give it back… so I bought her a new one and had it shipped to her house.  It seemed nicer to buy her the new one, versus buying the new one for myself and giving her back the old one [which I’ve gouged TWICE now with the circular saw].  Although like I said, Ab, if you have an attachment to the old one, I’ll totally bring it back!

Once the new set of slats were cut, I stained them and let them dry: 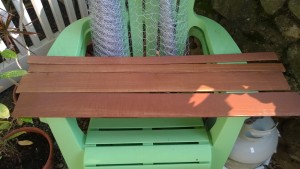 Then screwed them to the enclosure, on both sides of the corner: 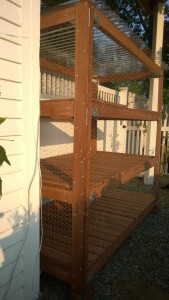