In August 2014 we hired a contractor to tear out our brick front steps and replace them with a wooden patio or stoop.  This is one of the few projects we have hired out.

When Jim first bought the condo [October 2009], the front steps looked like this [photos courtesy of my father-in-law]: 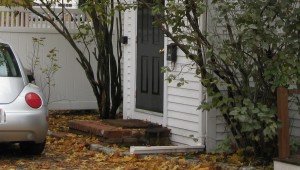 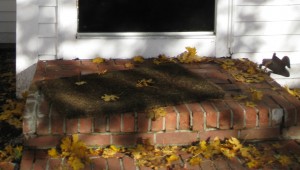 Not bad.  Just your typical set of brick steps.

By early July of this year, they were starting to show signs of crumbling: 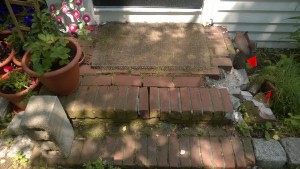 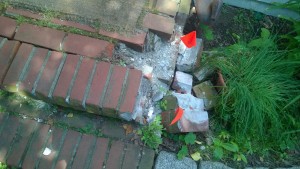 And by early August they were getting downright unsafe [Darwin, on his leash, after a bird flew under my car – it was the only picture I could find showing the increased deterioration]: 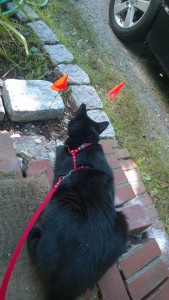 At this point the mortar was acting more like sand and less like mortar – every day another brick slid further out of place.  The mail delivery woman told me she’d seen better steps in the projects – d’oh!  [she didn’t say “projects” but she referenced a certain low-income neighborhood].  She said if we didn’t fix it soon she’d stop delivering our mail.  Can’t say I blame her… I assured her they were getting fixed asap… I cleaned up the area as best I could and tried to lay down some granite blocks to the right of the stairs, leading to our mailbox. 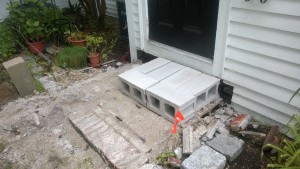 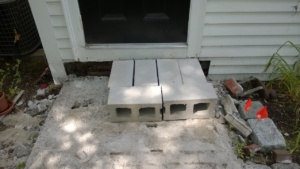 Wobbly cinder blocks.  Classy.  As far as I can tell [from our driveway cam], nothing further has been done today.  Grumble.

As an aside, this summer I started taking both boys out on their leashes.  Cats on leashes are adorable!  Darwin is a very good boy and stays right near me and near the door.  Bonkers tends to wander, dragging me with him.  Inevitably, something startles him and he can’t get his feet all moving in the same direction fast enough to get back to the house.  Jim calls him our “special needs cat” which is pretty accurate.  Darwin’s in red, Bonkers’ in blue: 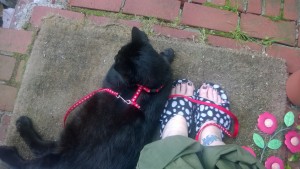 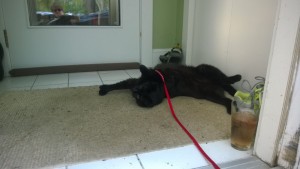 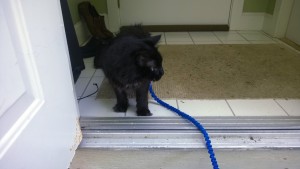 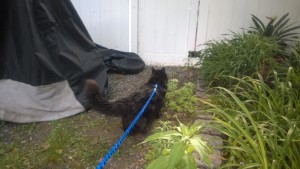 Hopefully I’ll be able to post a picture of our new, wooden front steps later this week!