So I had a mini meltdown last night.  Caused by a string of events that started yesterday afternoon when I learned from my mom that the small bookcase I’d painted dark purple in the girl cave was originally painted with oil.  Which explains why the paint wasn’t sticking.  Which explains why this happened this morning when I removed some stuff I’d put into it last night: 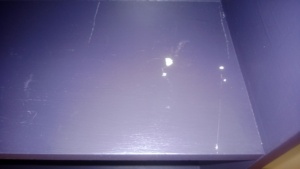 Which means a total re-do that will be 3x more work than the original paint job I did.  Sanding off the latex.  Priming with BIN sealant.  Repainting with dark purple latex.

So… to distract myself from that set back, I grabbed the little ceiling hooks I’d spray painted black, grabbed my stud finder, set up my ladder, and screwed a few hooks into the girl cave ceiling joists.  I grabbed the string of lights I’d started hanging up Monday, and fed it through the hooks.  It slid out.  So I grabbed some pliers and tightened the hooks into the joists so the hook part was almost touching the ceiling, which created loops more than hooks.  I re-strung the lights – which looked awesome – and promptly realized they aren’t the type of string lights you can string together: 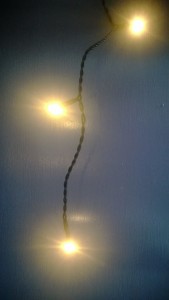 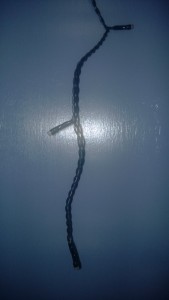 GAH!!!  There’s no plug at the end!  Just a lonely light.  *FACE PALM*.  It never occurred to me to even check that – every string of lights I’ve ever owned has a plug at the end to attach to the next string!!!  That was the last straw.

Although I’m classifying it as a mini meltdown, since there was no crying.  Just lots of yelling, stomping around and pretending to bang my head on the kitchen counter.  I must say I’m feeling better today.  Hubby helped cheer me back up and we ate a good dinner and watched some Property Brothers and a new show we found called Buying Hawaii that is a lot like Hawaii Life*, but tells you what it’s REALLY like to live on the islands:  huge [HUGE] poisonous centipedes, large spiders, wild boars, feral chickens [ha!], lava zones, earthquakes, tsunamis, and a very high cost of living since everything has to be shipped  from the mainland.  We like knowing about all that stuff.  We still want to move there.  The other show glosses over everything and focuses more on the beautiful and relaxing way of life.  Glossy is nice, but real is quite helpful [seriously, those centipedes are f#@*ing huge…!]

I can’t remember if I’ve mentioned it or not, but hubby and I have big dreams of retiring on the early side and moving to Hawaii.  Which will be a very large change from Massachusetts!  We don’t know what island yet.  We have booked a belated Honeymoon for the end of April – 8 days on the Big Island.  If we love it, we’ll vacation to Hawaii as many times as we can, visiting different islands and areas.  That should help narrow down the area we’d like to retire to.   So for the past few months we’ve been addicted to HGTV’s show Hawaii Life.  And now Buying Hawaii too 🙂