Ever since installing an automatic cat fountain in the downstairs bathroom earlier this month, Darwin has been using it constantly [HOORAY!].  But the motion sensor is so sensitive the fountain turns on anytime we move past the bathroom door, which is all the time because it’s in our front hall.  Jim suggested installing a cat door so we could keep the bathroom door closed.  I was ECSTATIC because I love cutting holes in things.  Jim’s only stipulation was it had to have an opaque door so our guests would have privacy.  Nothing says “hey there!” like a hole in your bathroom door in a high traffic area, right?

I REALLY wanted this one [#affiliate]: 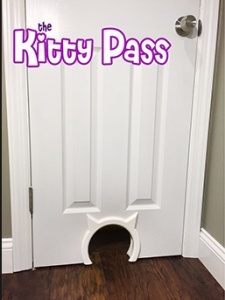 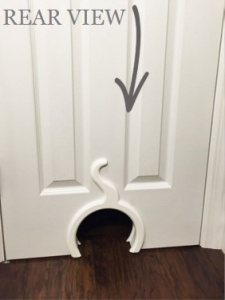 I liked the white and I loved the ears and tail!  And I liked that it came in an XL version for larger cats ahem Darwin.  BUT, it didn’t have a door flap.  I whined a bit [maybe a lot] and hubby reminded me he only had one stipulation [door flap] AND that he was letting me cut a hole in the house, which is something he’s very uncomfortable with.  So we compromised on this one [#affiliate] by Lynx: 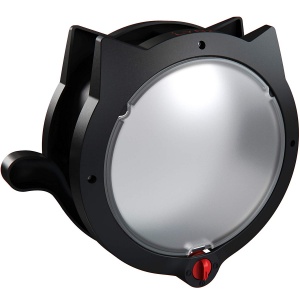 They used to sell a white version but those are nowhere to be found anymore.  MEH.  But it met both of our requirements [door flap for hubby, ears & tail for me] so we ordered one.

OMG they have white ones [#affiliate] in stock again!  As of like a week and a half ago!  I just ordered one… they’re only $40.  And maybe we can use the black one somewhere else in the house.  White would look so much better in our front hall since the door and trim are all white.  WOW! 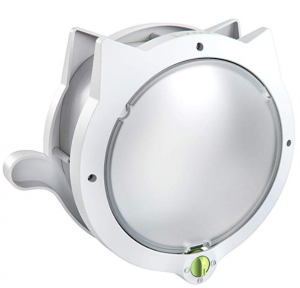 The installation started fairly well.  I measured the distance from the floor to the bottom of Darwin’s stomach [per instructions] and set that as the bottom level of the cat door [4″].  Then measured to find the center point of the door, then taped the pattern to the door and traced the lines: 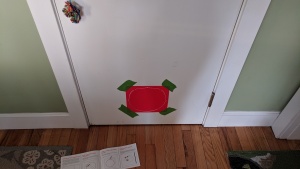 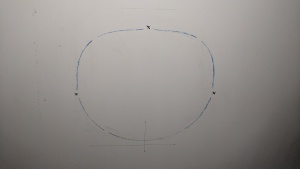 Because this is only the 2nd time I’ve used a jigsaw, I drilled my starting hole in the center of the circle instead of next to an edge [duh].  But I was able to get the cut to go all the way around.  Not the neatest cut, but it worked.  UNTIL I tried to push the piece out and realized the jigsaw blade was an inch too short and my cut didn’t go all the way through the door – OMFG: 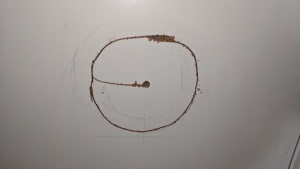 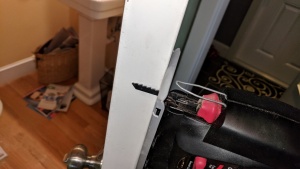 So had to order a 4¼” jigsaw blade from Amazon because all the hardware stores near me only sell T-shank blades that long, not U-shank which is what I needed.  A few days later the new blade arrived and I was able to finish cutting through the door.  And of course, with only 2″ to go, the blade popped off the jigsaw and I couldn’t get it back on.  I think that little red plastic piece that holds the blade onto the saw is what broke.  Sorry, Dad!  I had to cut the last 2 inches of the circle with a hand saw.  But it worked!  Looks nice from a distance, doesn’t it?: 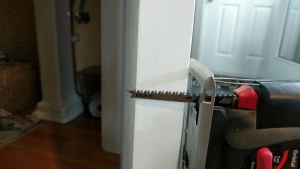 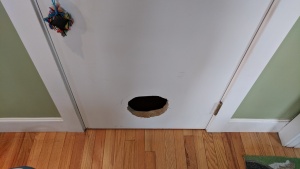 NOT so great from close up [thankfully the cat door will cover the rough edges]: 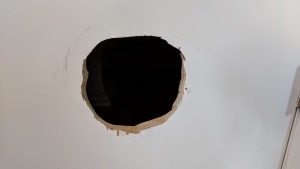 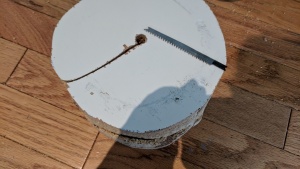 Darwin, who always needs to know what’s going on, immediately came over for a peek: 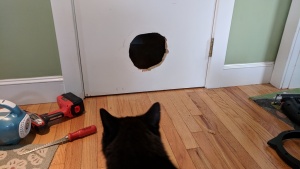 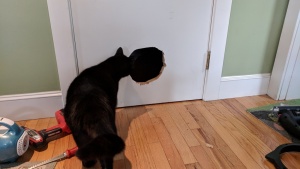 At least we know the hole is the right size.  Can you see his eyes in the last pic?: 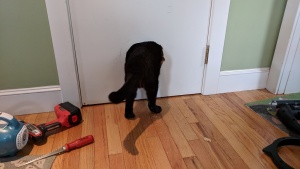 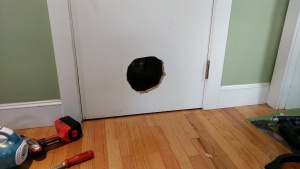 I popped the cat door in and it fit great [and you can’t see any trace of the mayhem I created with the saw blades]: 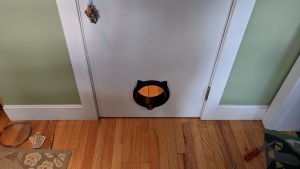 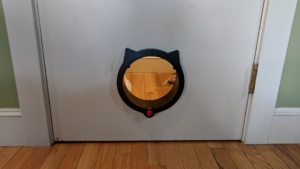 For now we’re leaving the door flap OFF, because I’m not really sure Darwin will be able to fit through the cat door with the door flap on…  Jim thinks he will, but I want him to get used to the cat door first before we add that obstacle: 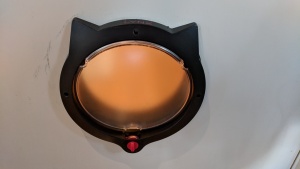 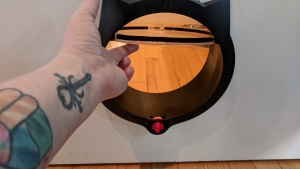 Cat treats were a very effective motivator to get him to use the door [not that he needed any]: 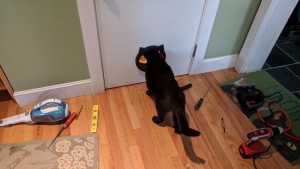 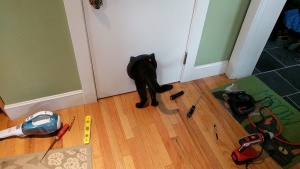 I installed it Sunday afternoon and by that evening he was already a pro, using his cat door and drinking from his cat fountain 🙂

[1] I installed a pebble-patterned wrap [#affiliate] for the AquaPurr cat fountain [#affiliate] [they have really nice patterned wraps including shells, leaves, Christmas, wood, marble… but I liked the pebble the best]: 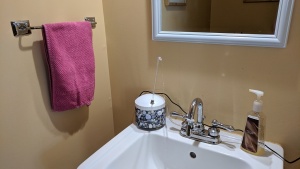 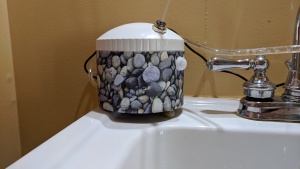 [2] I replaced the old, beige GFCI outlet [& switch] in the bathroom because it kept blowing when I had the AquaPurr and a nightlight plugged in at the same time [that shouldn’t cause a power load!].  I like having a nightlight in there so Darwin can see better when he’s drinking in the pitch black, and so the sensor is sure to always pick him up [we returned our first cat faucet because the sensor couldn’t detect black cats]: 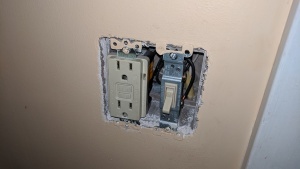 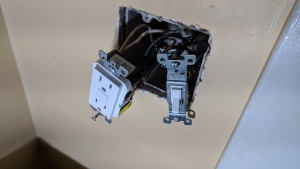 I had bought the white GFCI outlet and switch a couple years ago but never got around to installing them until now: 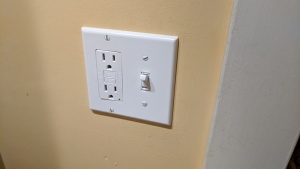 I’ve already ordered an LED nightlight [#affiliate] which you can set to white, any of 8 colors, or set it to rotate through all the colors.  I like that 🙂

[3] I tried to winterize the catio connector a bit with some leftover polycarbonate roof paneling from when I built the catio.  The cold wind blows straight through the connector and in through the cat door into our dining room.  I was hoping that by screwing the paneling to the front and side of the connector it would cut down on that: 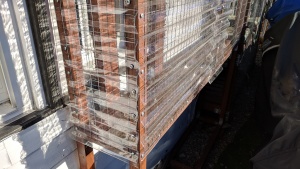 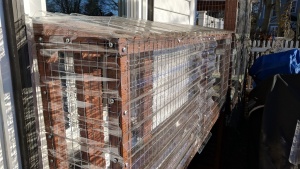 Unfortunately it didn’t really help with the wind blowing into the house.  The wind pushes the cat door open about an inch and just pours in.  But the paneling can’t hurt, and hopefully should keep the connector a bit dryer when it rains and snows.