Once upon a time there was a fish baby: 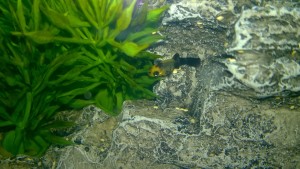 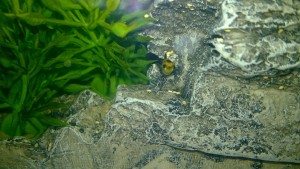 She appeared one day out of nowhere!  I didn’t even believe hubby when he told me he’d seen a baby fish.  Most baby fish are eaten immediately by the big ones.  But a couple days later I saw her, too!  The fish baby is so brave and fierce.  She’s very good at hiding in the underbrush and only coming out when the big fish are nowhere nearby.  She shares the tank with 2 orange “mickey mouse” platys [the black marking on their tales looks like a mickey mouse hat], a yellow and black platy, and a zebra nerite snail: 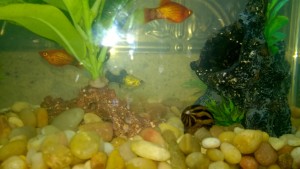 We’re assuming the yellow and black one is her mummy, but we don’t know for sure.  All 3 big fish patrol the tank and keep an eye out for the baby [not in a mothering way, more in a “where’d that there little snack thing go” way], but mostly the orange ones while the hours away gazing lovingly at their own reflections: 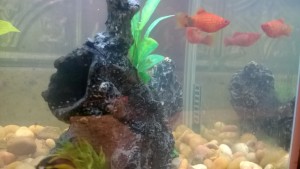 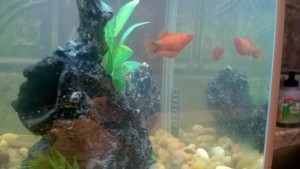 Over the past 3 weeks the fish baby has grown so big and strong!  Last weekend she started coming out with the big ones during feeding time: 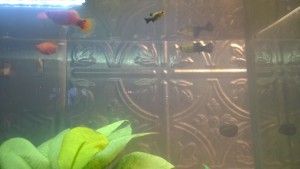 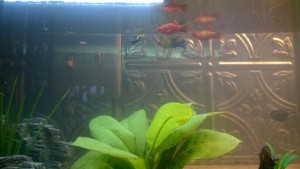 Here she is with her mummy [we think that’s her mummy, could be the daddy]: 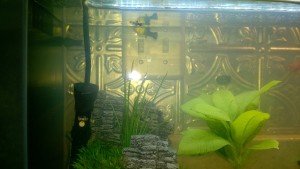 But mostly she keeps close to the underbrush and smiles at us when we look in: 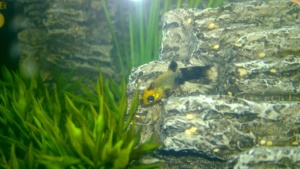 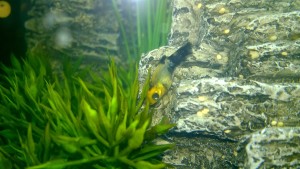 Apparently [from what I just read] platy’s are known as “live bearer” aquarium fish, so it’s not uncommon to find a fish baby!  Cool!  Although they can have up to 80 at a time – OMG!!!