Last weekend I got the frame of the cat enclosure stained and built.  Today I got the shelf slats cut and stained.  They’re not nailed down yet, that will be the next step.  It’s supposed to rain tonight through tomorrow, so even though I’m STILL not feeling well, I pushed myself to work on the slats today. 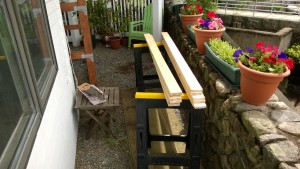 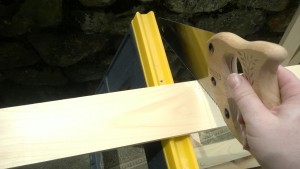 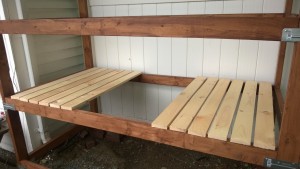 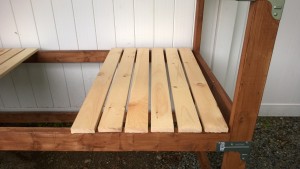 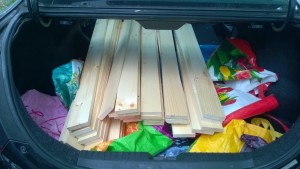 At this point, hubby asked me “why aren’t you just using plywood again?” and I said “because slats will allow for drainage”.  But after spending a small fortune on 1×4’s, I’m starting to think I should have just used plywood for the shelves, with swiss-cheese holes bored into them for drainage…

I cut the ends off the 32 boards, leaving me with a pile of rubble.  Then discovered use #54 for my LL Bean tote bag:  hauling rubble to the basement: 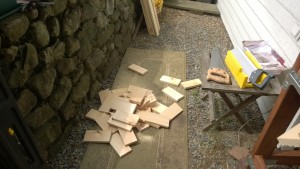 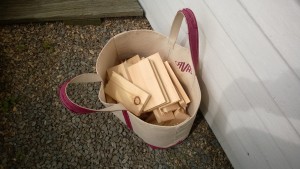 After they were cut, I got my palm sander out and smoothed down the ends: 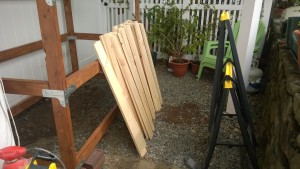 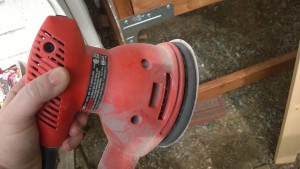 Then spent 2½ hours staining [thinking again that hubby had a point about plywood…]: 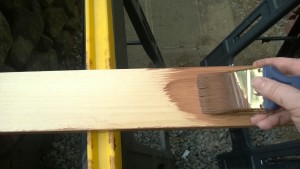 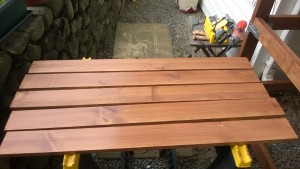 Thankfully today was overcast and rather cool.  Otherwise I’d have baked out there!  The waterfall provided soothing white noise while I worked: 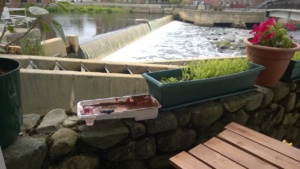 Here’s all my boards drying! 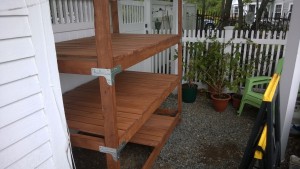 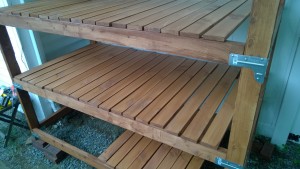 Thankfully the stain/water-seal dries very fast.  After 30 minutes I went back out and arranged the slats into the configuration I plan on using:

12 on top [6 on each side] with a break in the middle so the cats can jump down to the middle shelf: 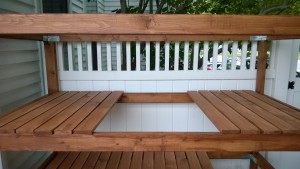 14 on the middle shelf with a break on the right side for them to jump down to the bottom shelf: 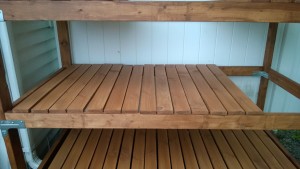 And 18 on the bottom shelf: 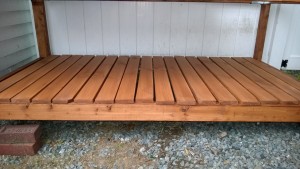 There will be outdoor cushions on the top 2 and middle shelves, and a litter box and cat grass planter on the bottom shelf.  And I’m pondering the creation of ramps to help Bonkers move easier between the levels.

I realized after the fact I’ll have to make a notch to the back of the shelves abutting the enclosure frame, otherwise the gap between that shelf and the edge of the frame will be too wide: 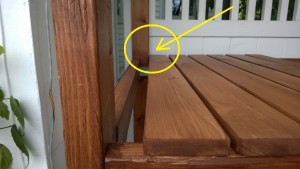 So the next steps will be notching the 5 slats abutting the frame, nailing down the 44 slats, and stapling the chicken wire to the frame.  Progress = good!