In July 2014 we hired a contractor to build us a small deck off the Master Bedroom overlooking the Ipswich River.  This is one of the few projects we have hired out.  This project has been in the works since February 2012!  Here is some background on what it took to go from conceptualizing a deck 2 years ago to finally breaking ground 3 weeks ago:

In February 2012, hubby first brought up the idea of a deck off the master bedroom.  We pictured it stretching across the back of the house, cantilevered over the river a few feet.  Nothing too big, just enough room for a couple of chairs and a little table.  A great place to read a book, listen to the river, watch the critters, relax…

In September 2012, we brought up the idea with the contractor [Roger] who owns the 3rd condo in our building, hoping he could get it built in early Spring 2013.  He told us he’d draft up some plans and get back to us.  A few weeks later he came back with these: 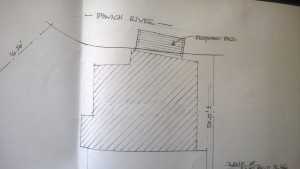 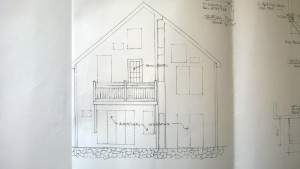 *insert lots and lots of waiting*

By March 2013, Roger had met with the Conservation Commission, and learned we’d also need to go through the Town Selectmen for a Special Permit to build over the river.  The Building Inspector met with the Selectmen and the town Planning Director on our behalf, and got the ball rolling for us to acquire the Special Permit.

By May 2013, Roger still hadn’t heard any news on our request for a Special Permit.  He met with the Building Inspector, who told him he’d consulted with legal council to determine the requirements for constructing a deck over the river [wouldn’t you think he’d have done that like 9 months ago???].  His legal council told him building a deck over a river falls under STATE jurisdiction, so we’d need to petition the state.  And, instead of a Special Permit, we’d need to apply for a town Variance.  WTH!  It felt like we were going in circles.  At this point, Roger suggested it might be less of a headache to build the deck over our back yard instead of over the river [something we hadn’t considered], and he drafted new plans: 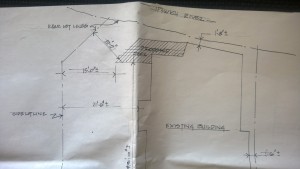 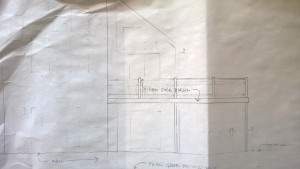 If you notice the shaded area in the first pic [aka “the deck”], it’s more of a trapezoid than a rectangle.  Unfortunately, the left side has to be at least 10 feet from our neighbor’s [angled] property line, hence the angled deck line.  Meh.  But whatever – it’s still a deck on the river, right?

In June 2013, the Building Inspector told Roger we had 2 options if we wanted to pursue building over the river:  [1] hire our own lawyer to research the state requirements, or [2] have him deny our Special Permit application, which would trigger a hearing before the town Zoning Board of Appeals, where we could present our case for special consideration and a Variance.  By that point, Jim and I had decided to scratch the “deck over the river” idea, and go ahead with the “deck over the back yard” idea, which we figured would be nice & straightforward – no Zoning Board of Appeals, no state involvement, no Variance, no Special Permits.  Right?

Roger alerted the Building Inspector we were changing directions and going to build the deck over the yard instead of over the river.  The Inspector came back and told Roger that current town by-laws prevent ANY construction within 20 feet of the river.  WTF!  Seriously!?!  You’d think that would be one of the FIRST things the Building Inspector would have looked up!  [Our condo was added to the back of the original house 40 years ago, before the current by-laws, and is only about a foot from the river].  So he said we’d have to go through the Zoning Board of Appeals and request a Variance to build so close to the river.  By this point I’d decided the Building Inspector was either asleep at the job, an idiot, or both.

Finally, in September 2013, a year after starting the process, we [Roger, Jim & I] presented our case before the Zoning Board of Appeals.  It was very stressful!   We had to go to Town Hall at 8pm on a week night – it was set up like a courtroom and was being filmed for live local broadcast.  When our case was called, we had to go up front and sit before the Board members, while other applicants and members of the general public sat in the audience.  They discussed our deck with Roger [who was speaking on our behalf] for about half an hour, then discussed it amongst themselves.  Thankfully one of the men on the board told the rest of the board they should vote in our favor, since the deck wouldn’t increase the footprint of our house, wouldn’t interfere with the river, wouldn’t have a negative impact on the town, and was a unique case due to the shape and location of our house – so they decided in our favor – woohoo!!!

Roger suggested we wait for Spring 2014 to begin construction, which would allow us to enjoy our new deck all summer.  However, Roger spent all Winter/Spring renovating his condo and his house in Maine, so it wasn’t until this month that construction actually got underway – almost 2 years after the initial discussion!  We still don’t have a DOOR to the deck [we have to climb out a window to get to it], but we have a deck!

Here is what was accomplished during week 1 of deck construction:

On July 1st, we came home to 2 deep holes in the ground, enclosed by large cardboard tubes.  The holes were very deep!  And covered by buckets weighted down with rocks.  I was glad to see that – I’d have hated if a chippy or squirrel fell down one!  That would be quite a rescue mission. 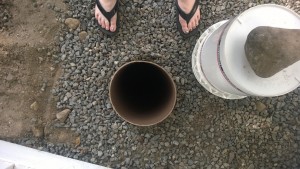 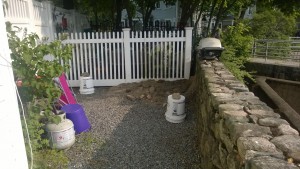 Two days later, the guys were back.  They filled in the holes with cement, and put the buckets with rocks back over them. 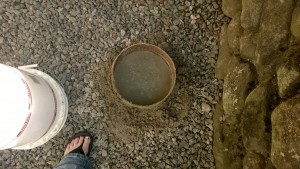 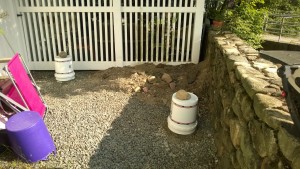 Nothing happened for the next 3 days.  I figured the cement needed a few days to harden, so I wasn’t too worried.  And on July  7th we came home to this! 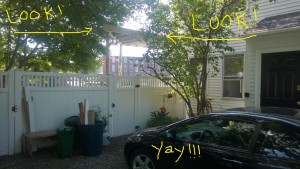 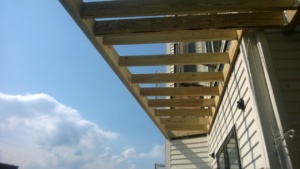 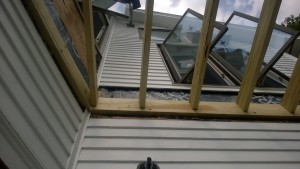 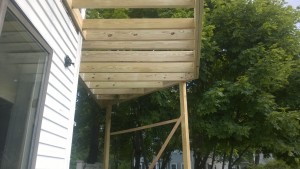 It was amazing to come home to a deck frame after seeing nothing for so long!  Stay tuned for Part 2!