Lately it’s been so rainy, which is great, because our plants & trees & grass & rivers need it!  Sometimes I wake up at night when the rain gets heavy and listen to it splattering onto the deck instead of going quietly down the gutter.  Every time I hear it I think “I really need to get up there and see why it’s not draining”.  But since it’s usually night when I notice it, I forget.  Today it rained off and on most of the day so I decided it was time.  I grabbed an old step stool from the basement and set it up on the deck.  I peeked into the gutter and the entire length of it was completely FULL, like an infinity pool.  Oikes.  I reached into where I knew the drainage hole was and felt a bunch of silt.  I pulled out a handful and with it came a bit of fabric.  WTH?  I reached in and grabbed the fabric and pulled.  And pulled and pulled!  It turns out one of the DIY roof ice melters [aka “rock salt sausages”] from 2015 has been blocking the gutter!  OMG!  Here are 2 reminder shots from the EVIL winter of 2015: 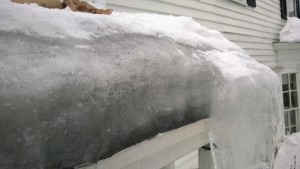 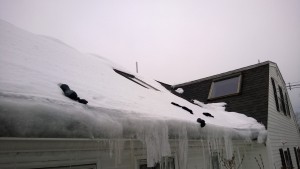 I am guessing one of the ones in the 2nd photo is what was clogging our gutter!!!  Once pulling it out I tossed the nasty thing down to our front stoop: 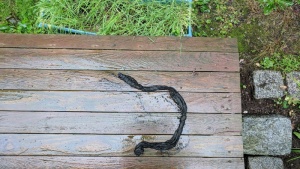 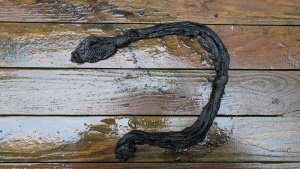 It looks like a snake.  But in the zoomed-in shot you can see the grippy treads from my old pair of nylon stockings 🙂

Once I removed it from the drainage hole the gutter instantly drained with a loud sucking sound.  I really shouldn’t have let it go that long… oops!  I guess we should be happy it didn’t rip off the house since it was so full and heavy with water for the past 3½ years!  OMG…  I’m guessing the water has actually been draining down despite the stocking for most of that time, and it wasn’t until recently the hole got too plugged with silt to drain. 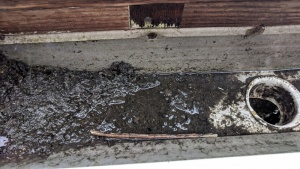 While I was up there I was face to face with the hole where Starlings have been nesting for the past countless summers.  They found a way up into the eave and have raised many [loud and messy] babies.  But I enjoyed hearing them, especially the babies chirping.  BUT they are very messy and I don’t think it’s optimal to have them nesting in our eaves.  So I made the tough decision to cover the hole.  First I dragged out as much of the nest as I could.  Much to my surprise it actually smelled nice, like timothy grass.  But it still had to go because I had to know for sure there was nothing alive still living in there.  What a mess: 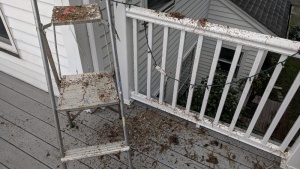 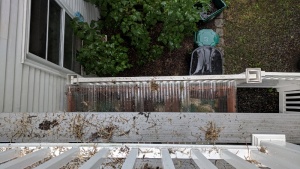 The 2nd shot is the view looking down at the top of the catio.  After I got out as much nesting material as I could I stapled hardware cloth to the eaves: 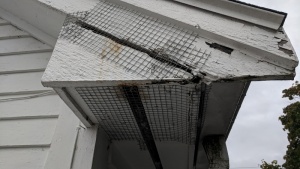 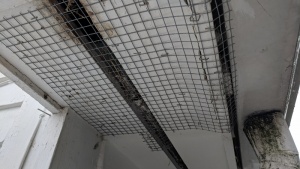 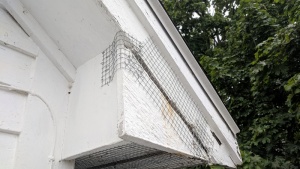 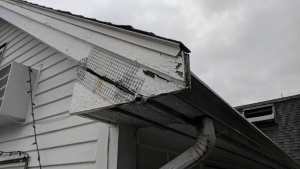 After that I took a long, cleansing shower.  Being covered in dusty bird nest detritus is not my idea of clean!  GROSS.

Here’s 2 shots of Darwin and I hanging out on the front stoop watching the cars go by Wednesday after work: 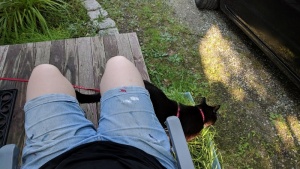 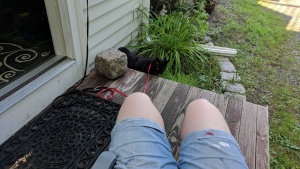 One of our bedroom hibiscus’ plants flowered, which I always love.  And 2 weeks ago I got this shot of the sunset from the deck.  So pretty: 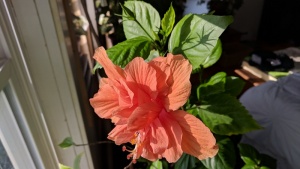 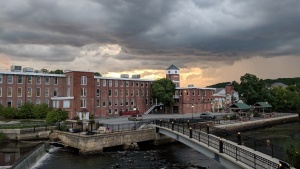 I spray-painted the hardware cloth white. Looks MUCH better: 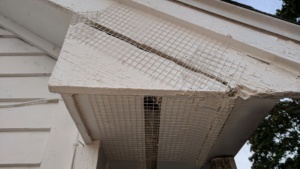 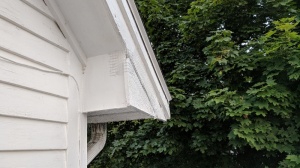