Last Friday our dryer stopped getting hot.  It still worked fine, but there was no heat.  Hubby [who’s in charge of laundry] had to bring a dryer full of damp clothes up the street to the laundromat.  Our first thought was maybe the lint had clogged up the vents.  I climbed behind the dryer and detached the vent from both the back of the dryer and from the wall.  But when I looked in, it was empty except for a few tiny clumps which I removed with my fingers: 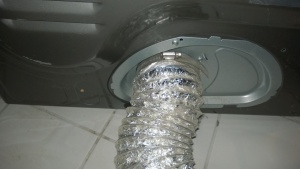 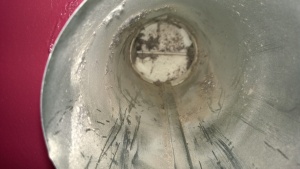 Our next step was removing the lint tray and looking underneath it, where lint can accumulate.  There was definitely some build up.  The last time we de-linted the dryer was in April 2014.  I used the lint brush I’d bought back then to scoop out as much as I could: 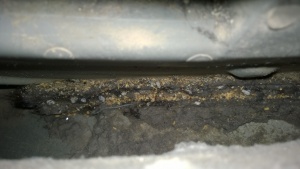 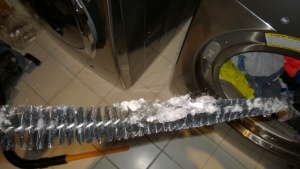 I should have worn a dust mask because the room was full of dust and I had to use the inhaler…  The pile I pulled out with the brush is on the dryer in the first pic: 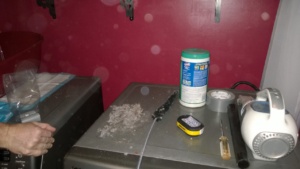 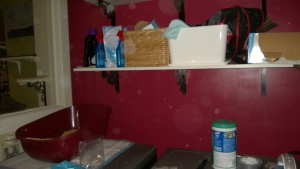 Before reattaching the vent hose I quickly fixed the baseboard heater cover which had fallen off last winter…  It turned out one of the hooks which the cover hangs on was bent way out of shape.  No idea how that happened, but I bent it back and re-hung the cover: 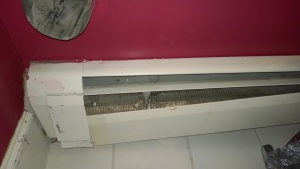 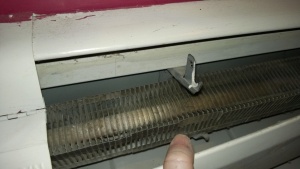 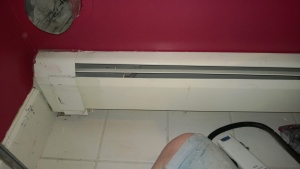 I reattached the hose to the dryer and wall and hubby tried the dryer again.  Still no heat.  MEH!

The last thing I tried before giving up for the night was unscrewing the little cover for the electrical connections on the back of the dryer just to check and make sure they were firmly attached, which they were: 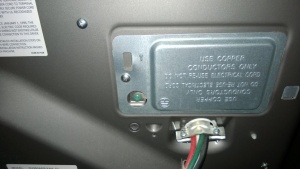 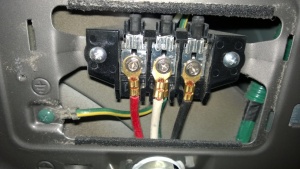 We decided at that point to call a Samsung technician in the morning.  Darwin, meanwhile, was thrilled to get himself into the empty dryer – he’s SO not allowed in there and he knows it: 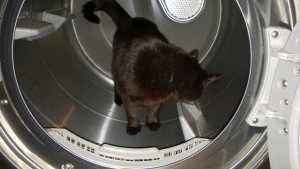 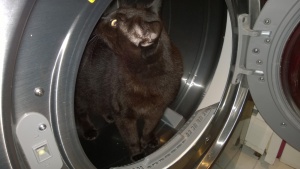 Later that evening I noticed Birdie & Darwin were playing together on the floor!  Darwin was hiding behind the laundry bag and Birdie was sitting in the doorway to the laundry room: 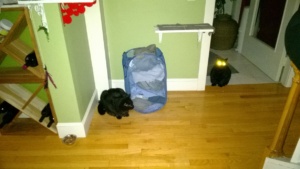 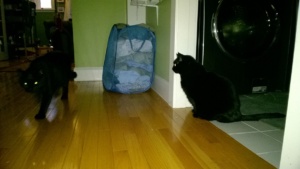 Stay tuned for part 2, which is when the technician was supposed to arrive today, but didn’t.  I took the day off from work to wait for him [and get other stuff done], but instead I decided to see if I could repair the dryer myself.  I think I’ve succeeded…  just waiting for some parts to arrive!  Serves the technician right for being a no show!