I have never been much of a griller.  For YEARS it was because I was scared I couldn’t do it.  Abbie kept telling me “IT’S SO EASY!” but grilling for myself was never very motivating.  After meeting Jim, I decided it was time to finally learn.  I’m mostly in charge of dinner and DIY and he’s mostly in charge of laundry and dishes, so the grill falls squarely in my domain.  4 years ago we bought a little portable Weber gas grill to replace the one my parents had given me about 10 years ago, which no longer worked.  The portable Weber is very cute and sits on the wall in our yard: 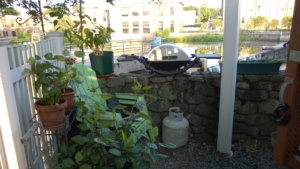 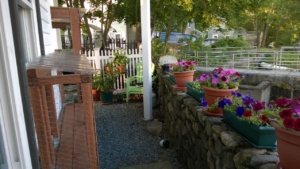 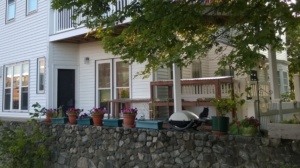 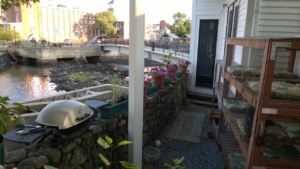 I learned early on to never leave the grill hose outside overnight or the squirrel will feast on it: 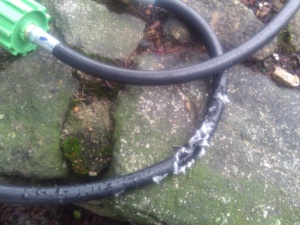 I grilled a few times in 2012 and 2013, but I didn’t grill at ALL for the past 2 summers.  I think because 2014 was the summer of the DECK, and 2015 was the summer of the CATIO.  Both of which very much impacted our yard availability.  Jim is vegetarian, and I’m mostly vegetarian, so our grill is considered a vegetarian grill.  I only cook veggies, veggie burgers, and veggie dogs on it.  Lately I’ve been obsessed with grilled eggplant – it gets so squishy and caramelized that it almost melts in your mouth *swoon*.  I could eat it every night.  But instead [because reality] I’ve been making it about once a week.  Here’s a run down of my latest grilled veggie feast, in case you want to try it:

I buy 1 or 2 eggplants [when buying eggplant always make sure you buy a “male”, which has a circle on the bottom instead of a slash: 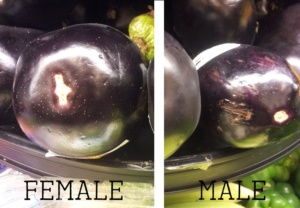 … photo courtesy of THIS SITE.  Male eggplants are never bitter and have less seeds.  Female eggplants can be bitter and usually require salting/pressing for an hour before cooking.  Who has time for that?].  So anyways, in addition to eggplant, I also bought 3 Vidalia/sweet onions and a bunch of asparagus.

Preheat the grill to HIGH.

Then cut the eggplant into ½” slices: 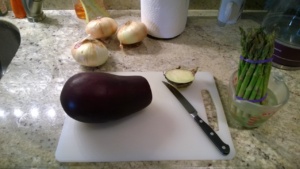 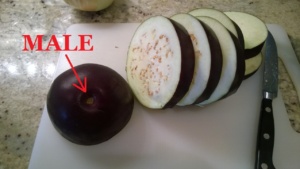 Place the pieces in a gallon-sized zip lock, add some olive oil & seasoned salt, then shake: 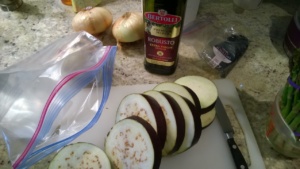 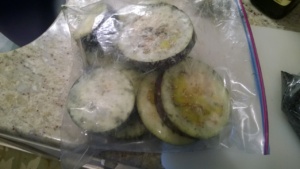 For the eggplant I used black “lava” sea salt from Hawaii – it has a bit of a zing to it: 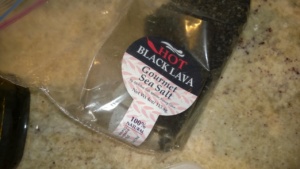 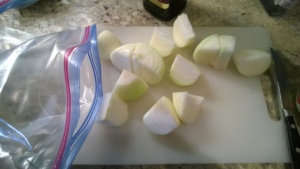 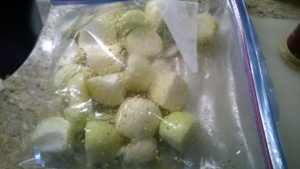 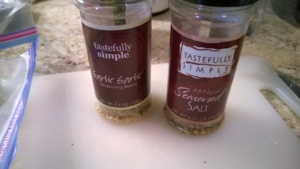 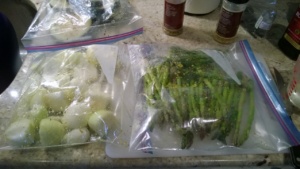 Then I carried my bags out to the preheated grill.  The grill was pretty hot but quickly cooled off when I opened it to put the veggies in, and stayed mostly in the 300-350° range for the rest of my cooking: 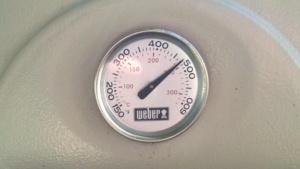 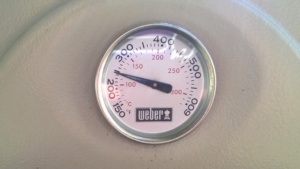 I dumped the bags of veggies onto the grill, arranged the eggplant so it was flat, and closed the lid: 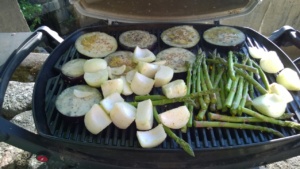 In hindsight I’m thinking some skewers would work better for the onions… Oh well.  As I said, I’m pretty much a grilling n00b.  I didn’t set a timer, but I checked the veggies every 5 minutes or so, and flipped them over with tongs.  I always cook with the lid closed. 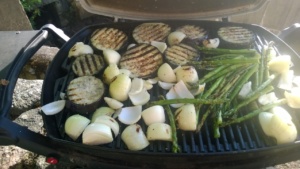 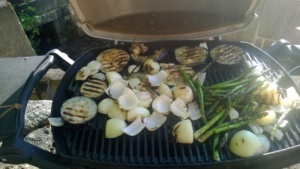 And after another 5 minutes – DONE: 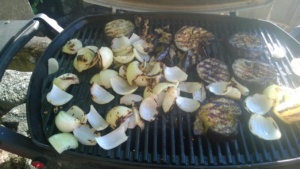 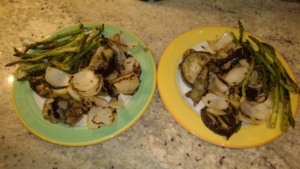 Hubby said the onions could have been cooked a bit longer.  They were a little al denté, so next time I think I’ll skewer them and put them on for 5 minutes before adding the rest.  Stay tuned for my next grilling adventure which will involve corn on the cob.  I have cooked corn a few times on the grill already this summer – it’s always amazing!

4 days later I grilled summer squash, zucchini, kousa, and corn!  If you’re scratching your head and saying “Kousa?” you’re not alone.  I’d never heard of it either.  It’s Lebanese squash, and is very similar to zucchini and summer squash. When I first saw it at the Gloucester Farmer’s Market last week I thought it was a hybrid of the two, because of the light green color and obvious similarities.  But the Lebanese farmer set me straight and told me many local farms are starting to grow it. Depending on your Google results it can also be spelled Koosa, Kusa, or Cousa, but the farmer spelled it “Kousa” so that’s what I’m going with. I took his assistant’s advice while chopping it and tossed a raw piece in my mouth – it was very tasty and sweet!

I also bought zucchini, summer squash, and corn from him. On Saturday evening I pre-heated the grill [on high], then sliced up the squash into chunks. I tossed them into 2 gallon-sized Ziploc bags, added olive oil, garlic flakes, and sea salt, and shook them up: 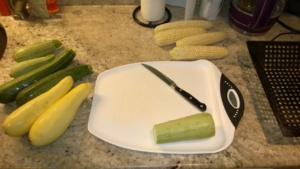 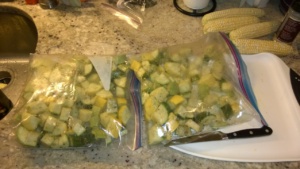 I didn’t do anything to the corn except shuck it and break the stems/ends off [they keep the grill lid from closing all the way]. I dumped the 2 bags of squash into my grill basket and was ready to head outside: 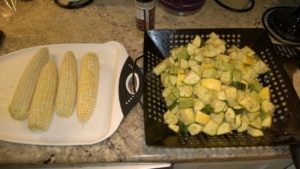 I placed everything on the grill, then closed the lid and went back inside. I don’t set a timer, I just try and check my grilled items every 5 or 6 minutes or so. Haven’t burned anything yet! Each time I went out I rolled the corn and stirred the squash. 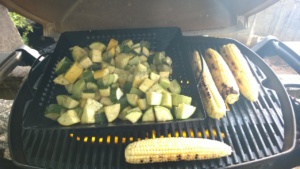 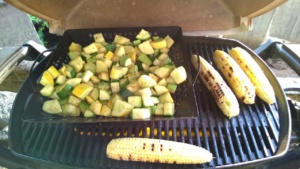 After another 6 minutes – DONE!: 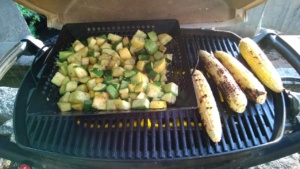 Soooooooooooo good! Hubby and I both prefer our corn sliced off the cob, in a bowl with butter and salt [and pepper for me]: 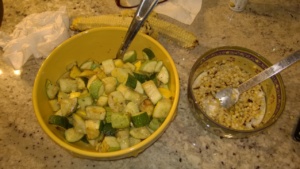 I give the corn cobs to the rats [after they cool off] so they can gnaw on the remaining kernels 🙂 I hope you’ve been enjoying your grill as much as I have!